Chakki bridge in Himachal Pradesh’s Kangra collapsed due to heavy rains on Saturday, disrupting train services between Pathankot and Jogindernagar 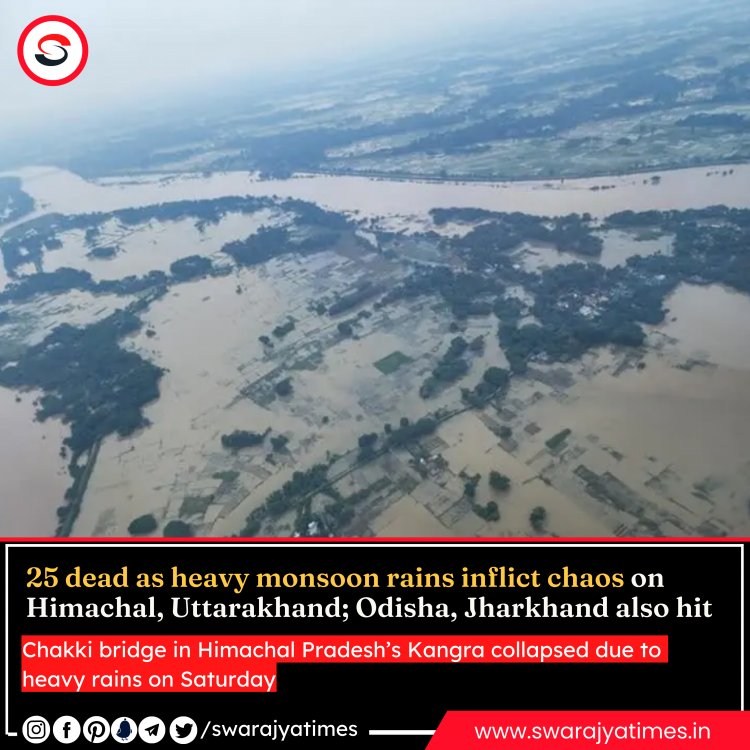 Shimla/Dehradun, August 20 : At least 25 people were killed in the hilly regions of the north and in the plains of the east as monsoon rains triggered flashfloods, landslides, and house collapses, upending normal life across large swathes of the country. 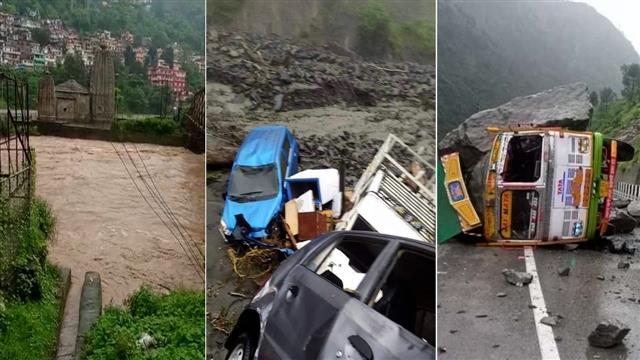 Himachal Pradesh bore the maximum brunt as at least 16 people were killed and eight went missing after landslides and other rain-related incidents in Mandi, Kangra oand Chamba.

The Chakki bridge in Himachal Pradesh’s Kangra collapsed due to heavy rains on Saturday, disrupting train services between Pathankot and Jogindernagar.

In the hill state of Uttarakhand, a series of cloudbursts early Saturday killed four people, while 10 went missing as rivers breached banks, washed away bridges, and threw mud and waters inside houses, forcing evacuation of multiple villages.

As the gushing waters threatened more damage, a number of roads were blocked for traffic, while all Anganwadi centres and schools were ordered shut in the Pauri district of Uttarakhand.

Rains also pounded parts of eastern India, with Odisha—already reeling under floods in the Mahanadi river system with around 4 lakh people marooned in 500 villages – reporting four deaths, and neighbouring Jharkhand one.

Odisha braced for more damage with parts in its north receiving rains since Friday night. Prices of vegetables have shot up in the markets of Bhubaneswar with the supply chain disrupted.

In the neighbouring Jharkhand, heavy rainfall associated with high-speed winds since Friday evening uprooted scores of trees and electricity poles, and submerged low-lying areas in many districts.

A woman died when a mud wall of her house caved in on her in West Singhbhum district on Saturday morning as the deep depression that crossed the Odisha coast on the previous evening brought incessant rainfall in several areas, an official said.

Normal life was thrown out of gear with rain disrupting power supply in many areas for long hours and causing traffic jams in major cities.

Two flights have also been cancelled till 2 pm due to bad weather on Saturday, officials at Birsa Munda Airport in Ranchi told PTI.

However, the Himkoti (battery car) track which is also known as the new track, is still closed due to ongoing clearance operation, even as the helicopter service remained suspended due to bad weather, officials said.

The pilgrimage was temporarily suspended Friday evening following heavy rains in the Trikuta hills. Thousands of pilgrims were present at the shrine when it started raining heavily around 6 pm and continued till midnight.

Back in Uttarakhand, water also entered the caves of Tapkeshwar, a famous Shiva temple on the banks of the Tons river, which was in spate, officials said.

A cloudburst occurred around 2.15 am in Sarkhet village in the Raipur area, they said, adding a bridge over the Song river near Thano got washed away while the Kempty Falls, a popular tourist spot near Mussoorie, was also flowing dangerously.

The affected people have been shifted to schools and panchayat buildings, said Sub-Divisional Magistrate, Dhanolti, Lakshmi Raj Chauhan, adding the Raipur-Kumalda road has been blocked by debris at many places.

This report is auto-generated from PTI news service. Swarajya Times holds no responsibility for its content.

Kejriwal Promises Free And Quality Education : If Gujrat Voted For Him In The El...