Anna Hazare wrote a letter to Arvind Kejriwal, wrote about drugs in power

Anna Hazare wrote, '10 years ago on 18 September 2012, there was a meeting of the members of Team Anna in Delhi.  At that time you talked about taking the political path. 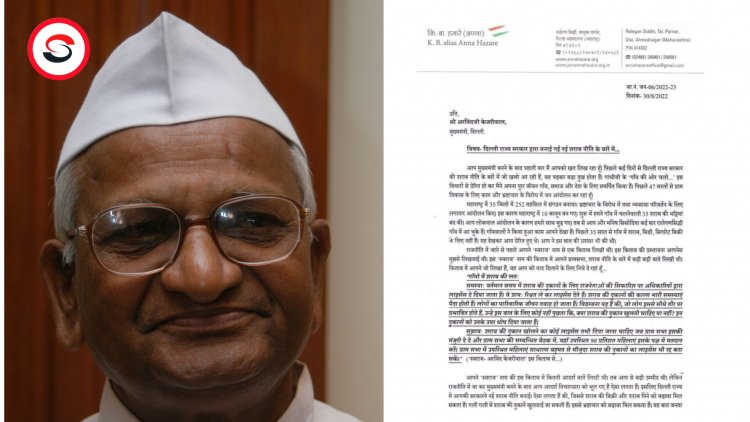 Anna Hazare, who is called the political guru of Arvind Kejriwal, has written a letter to him. In this letter, Arvind Kejriwal has been asked to close the liquor shops in Delhi. He said that Arvind Kejriwal had talked a lot in the book Swaraj, but it is not showing any effect on his conduct. Anna Hazare, while addressing Arvind Kejriwal in his letter, wrote, 'I am writing to you for the first time after you became the Chief Minister. It is sad to read the news that is coming about Delhi government's liquor policy for the last several days.
Anna Hazare said that inspired by Mahatma Gandhi's idea of ​​'Chalo towards the village', I have dedicated my life for the village, society and the country. I have been working for village development for the last 47 years and agitating against corruption. Reminding Arvind Kejriwal of the old days, Anna Hazare said that you have come to our village Ralegan Siddhi. Here you praised the ban on liquor, bidis, cigarettes etc.  Before joining politics, you had written a book called 'Swaraj'. In this book, you had written big things about Gram Sabha, Liquor policy, then there was a lot of hope from you, but after going into politics and becoming the Chief Minister, you have forgotten the ideal ideology.

Reminds me of 10 years ago:

Anna Hazare wrote, '10 years ago on 18 September 2012, there was a meeting of the members of Team Anna in Delhi.  At that time you talked about taking the political path.  But you forgot that the formation of a political party was not the aim of our movement.  At that time the public had faith in Team Anna and I used to think that we should do the work of public education and public awareness.  If there was a work of public education, then this kind of liquor policy would not have been made anywhere in the country.  Anna Hazare said that for any party to have a government, it was necessary to have a pressure group of like-minded people. Had it been so, the situation in the country would have been different today and poor people would have benefited.

Your government has formulated a new liquor policy in Delhi, which looks like it can encourage the sale and consumption of liquor.  Liquor shops can be opened in the street.  This will also encourage corruption and it is not in the interest of the public.  Even after this you have brought such a liquor policy.  From this it seems that just as there is an intoxication of alcohol, so is the intoxication of power.  You too are intoxicated with such power, it seems.  Anna Hazare said that you have lost your way from your purpose.