Another blow to the Congress, Jaiveer Shergill resignes from the post of national spokesperson of the Congress party. 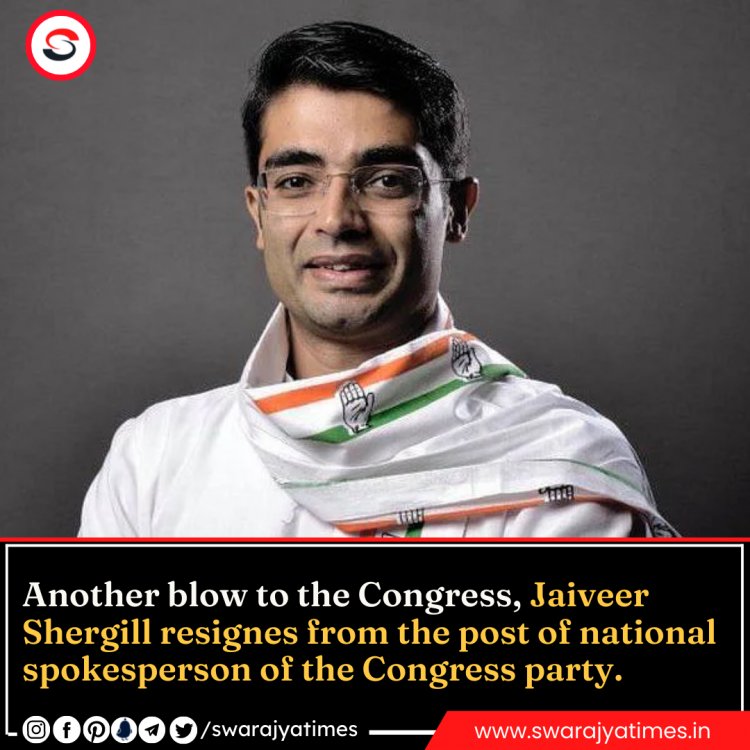 Another blow to the Congress, Jaiveer Shergill resignes from the post of national spokesperson of the Congress party.

The round of resignation is going on in the Congress party, where in the latest case, Jaiveer Shergill has resigned from the post of national spokesperson of the Congress party. He has written a letter to Congress President Sonia Gandhi regarding his resignation . In it, he wrote, 'I feel sad to say that decision making is no longer in the interest of the public and the country, but it is influenced by the selfish interests of those who indulge in sycophancy and are constantly ignoring the ground reality. .' Jaiveer Shergill has resigned from all party posts along with the membership of the party.

"It pains me to say that decision-making is no longer for interests of public & country,rather it's influenced by the self-serving interests of individuals indulging in sycophancy & consistently ignoring on-ground reality", wrote Shergill in his resignation letter to Sonia Gandhi pic.twitter.com/EHRODA5PoR — ANI (@ANI) August 24, 2022

Shergill, a lawyer practicing in the Supreme Court, came into the limelight when he launched a 24×7 legal toll-free helpline number to provide legal aid to his party workers. Before Jaiveer Shergill, former Union Minister Anand Sharma also resigned as the chairman of the party's steering committee on Sunday.

It is being told that Jaiveer Shergill was upset with the Congress party for a long time. He was not allowed by the party to hold a press conference for some time.

He also wrote a letter to Sonia Gandhi in this matter, in which it was said that he was being ignored in the party. Apart from this, he also said that he is not being included in the meetings and decisions before the Himachal Pradesh assembly elections. Anand Sharma's resignation is a big setback for the Congress, as he is considered among the tallest leaders of Himachal Pradesh. He has told the Congress President in his letter that his self-respect has been hurt as he was not invited to any meeting of the party.

Anand Sharma and Ghulam Nabi have been part of G-23

A day after his resignation, the state's All India Congress Committee (AICC) in-charge Rajiv Shukla had approached him to resolve the matter ahead of the Himachal Pradesh assembly elections in November this year. Apart from Anand Sharma, a few days ago, Congress veteran Ghulam Nabi Azad also resigned from the campaign committee as well as the Jammu and Kashmir Political Affairs Committee. Both Sharma and Azad were among 23 leaders who wrote to Sonia Gandhi in August 2020 demanding elections for the party president and the Congress Working Committee (CWC).

Hindi Poetry is the essence of India

Parliament Proceedings Should Be Disrupted Only In 'ext...

Ghulam Nabi gave a setback to Congress, rejected the po...