Fact Check: Ministry of Minorities to be merged with Department of Social Justice and Empowerment by Central Government 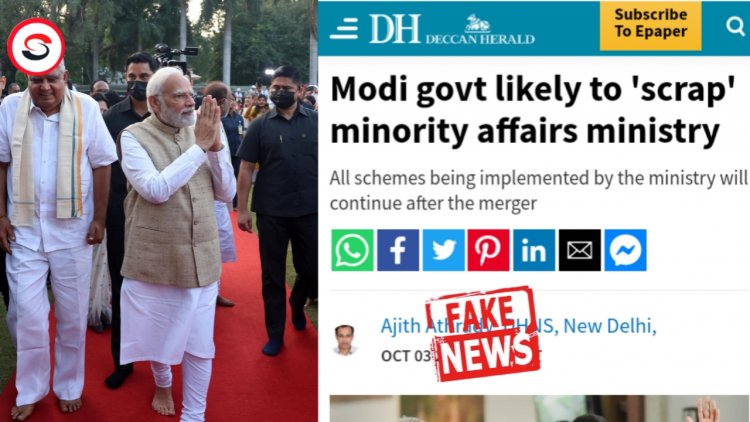 Fact Check :Media reports from a website are claiming that the Union government's Ministry of Minorities - set up by the UPA government in 2006 - and it is likely to be merged with the Ministry of Social Justice and Empowerment, government sources told DH (Deccan Herald) Told.

The Centre is likely to scrap the Ministry of #MinorityAffairs — established by the #UPA government in 2006 — and merge it with the Ministry of Social Justice and Empowerment, sources in the government told DH. https://t.co/FiD58MdOZw

Investigation: We got this news through social media, then we went to the respective website where the news was found on the Deccan Herald website, we sent this news to the Press Information Bureau run by the central government to investigate, then it was investigated by them.

Truth: PIB Fact Check stated that the claim being made is false He wrote "A media report published in @DeccanHerald claiming that the Central Government may abolish the Ministry of Minority Affairs and merge it with @MSJEGOI. This claim is FAKE, no such proposal is under consideration."

▶️ This Claim is #FAKE

▶️ No such Proposal is under consideration pic.twitter.com/RcTtyzyw59

In our investigation, this news was found to be fake.