These Are Some Of The Best Films To Be Released In Theaters This Month, See The Full List Here

This month of August is going to be very special for the film-loving audience because they will get to see many such films in this month which are not only the best but their fierce competition is also going to be on the screen. 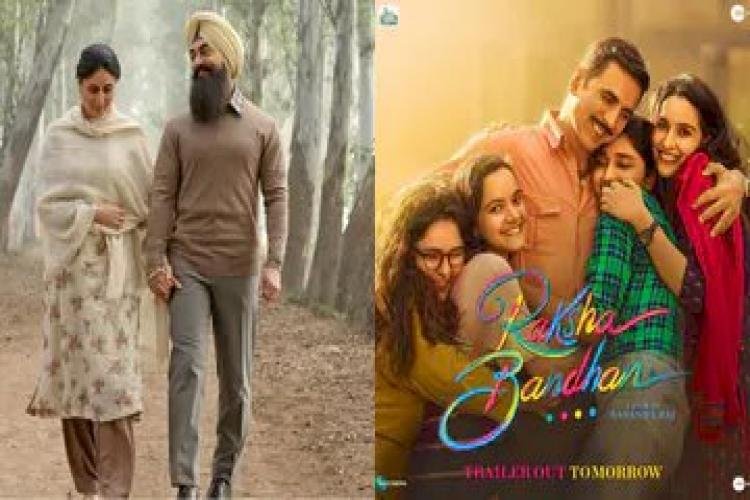 This month of August is going to be very special for the film-loving audience because they will get to see many such films in this month which are not only the best but their fierce competition is also going to be on the screen. Films of many big stars are being released this month, for which people are also waiting for a long time. While Aamir Khan is going to enter the silver screen after four years with 'Lal Singh Chaddha', Akshay Kumar is also all set to give tough competition to Aamir with his film 'Raksha Bandhan'.

Sita Ramam ,Release date - August 5
Mrunal Thakur's film 'Sita Ramam' is multilingual. Apart from Mrunal Thakur, Dulquer Salmaan, Rashmika Mandanna, and Sumant are going to be seen in lead roles in this film. Hanu Raghavpudi directed this film. It is being told that this is an action romance film. Dulquer Salmaan played the role of Lieutenant Ram in the film. This film will be released not only in Hindi but also in other languages.

male voice ,Release date - August 5
The film is based on a true incident in Uttar Pradesh. It has been shown in this film that 12 women fight for their rights but in their victory, there are many obstacles that they face. Many people threaten her and try to stop her, but in the end, she achieves her goal. This film has been directed by Kuldeep Kaushik and he has also written it. Artists like Lalit Parimu, Mannat Singh, and Diksha Maan are going to be seen in this film.

Haryana ,Release date - August 5
This film is based on the story of three brothers. In this interesting story, the three brothers later fall in love and from there the journey ahead starts which you are going to like very much. Stars like Yash Tonk, Ashlesha Sawant, and Monika Sharma will be seen in this film. This film is going to be released in theaters on August 5.

Miami to New York ,Release date - August 5
'Miami to New York is the 5th film to be released on August 5. The film is directed by Joy Austin. Stars like Rihanna Minaj, Nikhar Krishnani, and Rohini Chandra Jainal Lakal will be seen in this film.

Lal Singh Chaddha ,Release date - August 11
People have been waiting for a long time for the film 'Lal Singh Chaddha' adorned with stars like Aamir Khan and Kareena Kapoor Khan. Filmmakers are also very excited about this film. This is the official Hindi remake of the Hollywood film 'Forrest Gump'. The film is directed by Advait Chandan.

Raksha Bandhan ,Release date - August 11
None of Akshay Kumar's films has been accepted this year, but he is once again present with another film. So far two of his films have flopped at the box office. This is Akshay's third film this year. However, whether it will work or not, will be known only after the release. The film is directed by Aanand L Rai.

Kartikeya 2 ,Release date - August 12
Releasing at the box office on August 11, the film will feature stars like Nikhil Siddharth, Anupama Parameswaran, Aditya Menon, Anupam Kher, and Harsha Chengdu. This film is directed by Chandu Mondeti. Apart from Hindi, this film will also be released in Tamil, Telugu, Malayalam, and Kannada languages.

Yashoda ,Release date - August 12
Samantha Ruth Prabhu's film Yashoda is scheduled to release in theaters on August 12. Apart from Samantha, Unni Mukundan will be seen in the lead role in this film. The film is directed by Haresh Narayan.

re ,Release date - August 19
This film by Taapsee Pannu has been in the headlines for a long time. People liked the trailer of this film very much. The film is directed by Anurag Kashyap. The audience will get to see many twists and turns in this mystery drama film.

Liger ,Release date - August 25
The news of Bollywood is coming such that people are very eager for Vijay Deverakonda's 'Liger'. Vijay Deverakonda is also going to make his Bollywood debut with this film. Ananya Pandey will be seen opposite him in this film. Puri Jagannath directed this film. This is a sports drama film produced by Karan Johar. Apart from Vijay and Ananya, veteran actors like Ramya Krishnan are also going to be seen in the film.

PM Modi has assigned a new task to Indians, this time he has urged Indians to pu...

When Lalita Pawar's Face Was Ruined By A Slap By The Ac...

Suhana Khan or Ananya Pandey, who will marry first? Sha...

Actress Urvashi Rautela Arrived To Watch The Match, And...