Video of farmers throwing garlic goes viral, due to low price, garlic has to be thrown

a video shared on Twitter by Kisan Swaraj Sangathan (KSS), a farmer can be heard saying that they are throwing away garlic crop due to low prices. 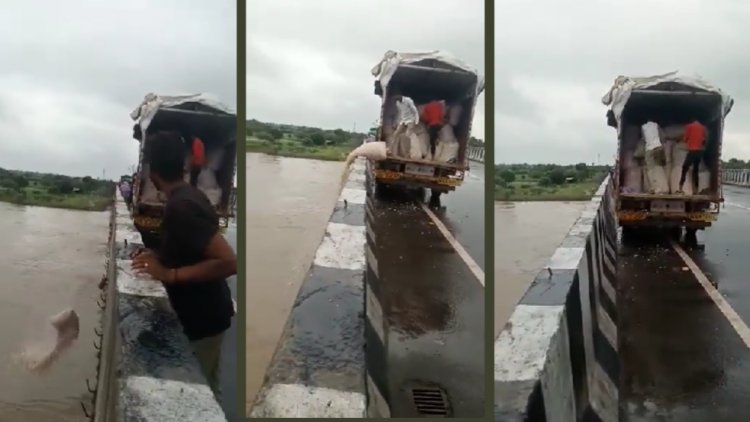 Due to low prices in Madhya Pradesh, an incident of farmers throwing sacks of garlic in the river has come to the fore on Thursday.  Kisan Swaraj Sangathan shared a video on its Twitter account In the video, farmers can be seen throwing garlic in the river.  At the same time, the farmers' organization has demanded the government to allow the export of garlic.

Kisan Swaraj Sangathan, an organization representing farmers in Madhya Pradesh, said farmers are getting lower prices for their garlic crop.  The farmers demanded that the central government should allow the export of this produce to promote the market.  A video of farmers throwing sacks of garlic into the Parvati river from a bridge on the border of Sehore district and Rajgarh districts of the state has surfaced on social media.

Video from Sehore in Madhya Pradesh
In a video shared on Twitter by Kisan Swaraj Sangathan (KSS), a farmer can be heard saying that they are throwing away garlic crop due to low prices.  An official of Kisan Swaraj Sangathan said that the clip is from Ashta town in Sehore district and was sent by a worker there.  Farmer Jamshed Khan of Phool Mogra village claimed, “Traders are buying garlic at the rate of Rs 1-4 per kg while the cost of production is Rs 30-40 per kg.  We are facing huge losses hence throwing away our produce.  KSS said that the production cost of one quintal (100 kg) of garlic ranges between Rs 2500-3000, whereas its price is getting only Rs 300 to 600 per quintal.

Under the leadership of farmer leader Suryapal Singh Thakur, the farmers staged a sit-in and submitted a memorandum to the Jawar Tehsildar.  In a memorandum addressed to Prime Minister Narendra Modi and state Chief Minister Shivraj Singh Chouhan, there has been a demand for immediate permission for export of onion and garlic in the interest of farmers.  The memorandum states that the production cost of one quintal of onion is Rs 2000 while its market price is in the range of Rs 500 to Rs 800.  The protesting farmers said that if the issue was not resolved soon, they would agitate in front of the assembly along with the local MLAs and MPs.