'Double XL' teaser released: Sonakshi and Huma gave a befitting reply to those who commented on the body

The teaser of Bollywood actress Huma Qureshi and Sonakshi Sinha's new film 'Double XL' has been released. Can this film prove to be a befitting answer for those who do body shaming? 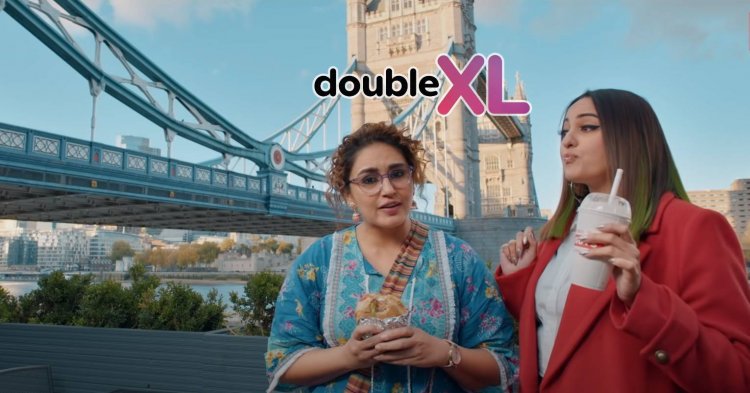 Bollywood actresses Huma Qureshi and Sonakshi Sinha will soon be seen together on the big screen giving a befitting reply to those who do body shaming. The teaser of their film 'Double XL' has been released on Thursday. In the teaser, both actresses are seen sitting together. The teaser is being liked a lot. In the teaser, both the actresses are seen as overweight and are seen talking about their body parts, body weight and the figures women. This film of his will be an answer for those people who tighten their tone about women and their body parts.

From fries to fun..all good things in life come in #DoubleXL sizes! ????

A story of friendship and dreams filled with masti is coming in cinemas near you on 14th Oct 2022.#DoubleXL #baatmeinWAZANhai pic.twitter.com/U8HDyT3FW3

In the 31-second teaser, Huma Qureshi and Sonakshi Sinha are seen having a lot of fun talking and talking. Also, the looks of both are also looking quite different. In the teaser, Sonakshi says that 'the bra is needed but the waist is so...'. This film was discussed among the people for a long time, after which the teaser of T-Series, Wakao Films and Mudassar Aziz's film has been released after a long wait.

People are now waiting for its trailer. Also, this film has been produced by many people, including Bhushan Kumar and Krishan Kumar, Vipul D Shah, Rajesh Behl, Ashwin Varde, Saqib Saleem, Huma Qureshi and Mudassar Aziz. The special thing is that along with the release of the teaser of the film, the makers have also announced the release date of the film.

The film has been shot in India and UK. According to the news related to the film, both the actresses have increased their weight by 15 to 20 kg for the film. Apart from Huma and Sonakshi, actors like Zaheer Iqbal, and Mahat Raghavendra will also be seen in the lead roles in the film. The film will be released in cinemas next month on October 14, 2022.

Also, the fans are looking very excited to see this film. However, the trailer of the film can also be released in a day or two. If seen, a very serious issue has been raised in this film, which has also been tried to be shown with great beauty and detail. Now it remains to be seen how much people like this story of two women.

Parveen Babi's house in which his body was lying for three...

Believe in yourself you can accomplish more than you think...