Genrobotics, a leading Robotics Company in India, presented the future of clean-tech robotics, Bandicoot, the “world’s first robotic scavenger,” at the Indian Sustainability Lounge during theWorld Economic Forum 2023. Clean-tech has emerged as one of the world's most aspiring industries. 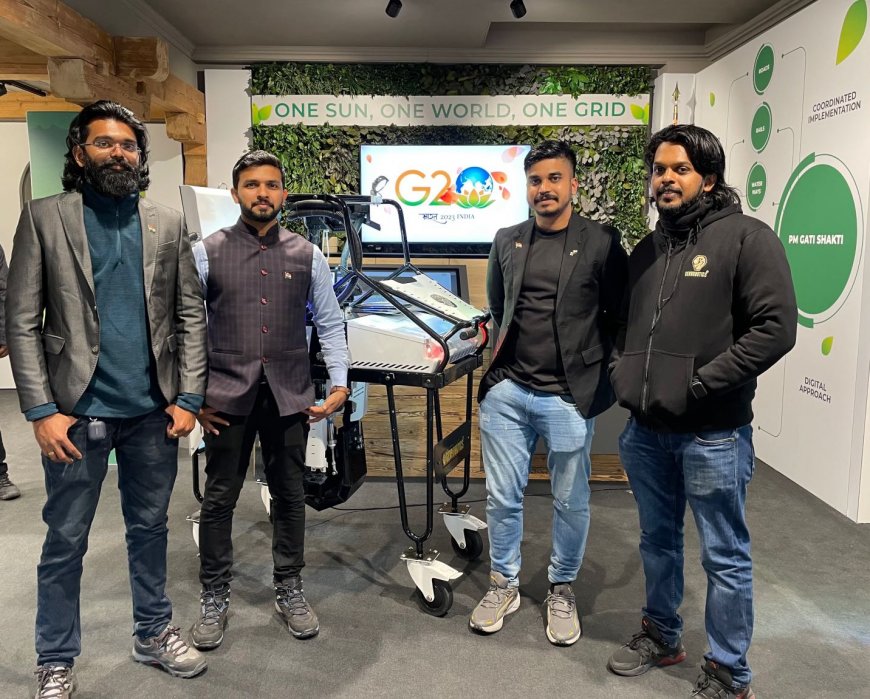 Genrobotics, a leading Robotics Company in India, presented the future of clean-tech robotics, Bandicoot, the “world’s first robotic scavenger,” at the Indian Sustainability Lounge during theWorld Economic Forum 2023. Clean-tech has emerged as one of the world's most aspiring industries. Genrobotics’ Bandicoot andtheir other lines of products perfectly integrate advanced technologies like Robotics and Artificial Intelligence for various sanitationneeds efficiently. Bandicoot, manufactured by Genrobotics, aKerala-based start-up incorporated in 2017, was chosen by the Indian Ministry of Industry and Commerce to showcase the product in Davos, Switzerland.

The first robotic scavenger in the world, Bandicoot, created a big buzz during the World Economic Forum, with government delegates from many different countries evincing great interest in the product.The representatives of Canada, Germany, and many other European countries had a series of discussions with Genrobotics’ co-founders for implementing and expanding their clean-techproductsand servicesto their regions.

In addition to Bandicoot, a robotic rover called Wilboar that effectively cleans large restricted spaces in the oil & gas, chemical, and sanitation industries as well as G Beetle, a cutting-edge clean-tech product for skyscraper maintenance, can also be utilized in the global scenario. These products have already been exported to various ASEAN markets to address the region’ sanitation needs.

Genrobotics, a national startup award-winning robotics company from India, incubated under the Kerala Start-Up Mission (KSUM),engineered the robotic scavenger to eliminate the practice of manual scavenging and cleaning within confined spaces. Bandicoot has successfully eliminated inhumanity of human intervention in cleaning these spaces and the possible risks involved.

The Bandicoot robot has created an impact on the sanitation industry in India bybringing sustainability to the process and providing underground sewage maintenance with maximum efficiency and safety. This has set an example of how a country can develop and adopt new technologiesbyfostering a start-up ecosystem in the country.

"Our attendance at such a prestigious global forum will benefit more stakeholders to access Bandicoot and introduce it in improving and maintaining the sanitation of various countries. It will help us in scaling up our operations by forging partnerships with various international ventures and government agencies," saidMr. VimalGovind MK, CEO of Genrobotics. Through the implementation of clean-tech in India, Bandicoot by Genrobotics has not only improved sanitation in India but also empowered the lives of more than 3,000 sanitation workers in 17 states and several union territories across the nation, allowing them a sustained living.

Along with the technological advancements in the sector, Genrobotics has createda considerableimprovement in the Indian economy by providing more employment opportunities to the youthof the nation. Through deeper research in robotics and AI, other series of products such asWilboar and G Beetle are on their way to ushering in a revolution in clean-tech robotics with a global outlook. As a result of this impact,Genrobotics heldan overwhelming presence across the Indian Sustainability Lounge at the2023 World Economic Forum heldin Davos, Switzerland.

Less cold from today, but trouble due to rain, relief for UP and disaster for Ra...

Secrets of physical and mental health revealed in ‘Sw...

“I just wanted to be a part of Sidharth Sir’s world...