Rakhi Sawant, who is often in the news and controversies about her statements, is going to contest the elections of the year 2024 and she herself disclosed this. He said 'My name for the elections...'. 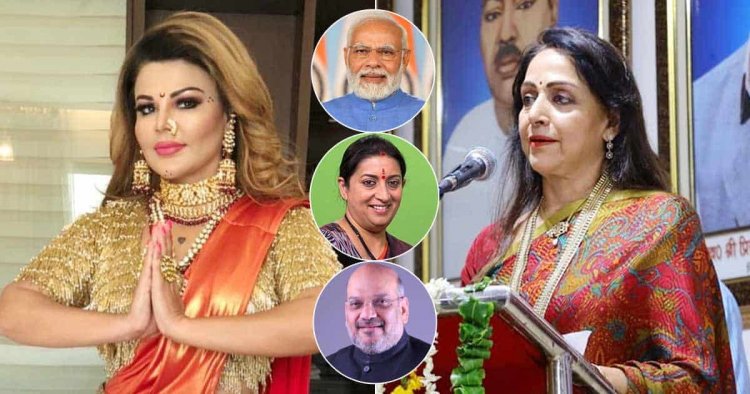 Actress Rakhi Sawant, who is called the drama queen of the Bollywood industry, often remains in the headlines for one reason or the other. Rakhi was in discussions these days about her relationship and marriage with her businessman boyfriend Adil Khan Durrani, but now she has come into the limelight for the 2024 elections. Yes, the actress has recently released a video on her social media account, in which she is seen talking about the 2024 elections. The actress says that 'she is going to contest elections in 2024 and her name has been announced by actress and mother-in-law Hema Malini'.

This video of Rakhi Sawant is becoming increasingly viral on social media. In the video, Rakhi is seen in a red dress. In the video, the actress says 'Today I am so happy. Actually, it was a secret that I am going to contest elections in 2024. These Modi ji (PM Modi) and Amit Shah (Amit Shah) were about to announce '.

Rakhi further says that 'But it is my good fortune that the dream girl of my heart, my sweetheart Hema Malini has announced that I am going to contest elections'. Actually, what Modi Ji and Amit Ji were about to say about me, whether it is Modi Ji or Hema Ji, there is only one thing for me. I am going to be Smriti Irani Part 2'.

The actress further says in the video 'I am very happy now I will contest elections. Yes, I will contest the election. And you all will support me, won't you? Thank you Hema Malini Ji you have given such a nice statement for me thank you '. Rakhi Sawant is also being trolled for this video, but the actress does not mind this. Users are giving their own reactions to their videos. Meanwhile, a video of Hema Malini is also becoming very viral on social media, in which she is seen talking about Kangana Ranaut contesting the elections.

When Hema Malini was asked by the media about Kangana Ranaut that 'Kangana is going to contest elections, what do you have to say on this?'. Answering this question, the actress says that 'It is a good thing. My thoughts are on God. Lord Krishna knows everything. You will not let anyone else who wants to become an MP here.

Keeping her point forward, the actress says, 'You people have put such a thing in everyone's mind that the film will become a star. All you need is a movie star in Mathura. Will send Rakhi Sawant tomorrow too. On this statement of Hema Malini, Rakhi has given her answer in this video, which is now becoming increasingly viral.