Parashurameshvara Temple: This Shivling Was Established By Lord Parashuram To Atone For The Murder Of His Mother, Know The Glory Of The Temple

By the way, every day of Shravan month is holy in itself. But the coming Monday this month, Pradosh fast and monthly Shivratri have special recognition. During this, there is a huge crowd of devotees in Shiva temples. Today in the month of Sawan, we will tell you about Parshurameshwar Puramahadev Temple, which is located near the Baghpat district of Uttar Pradesh and is the center of faith of the people. 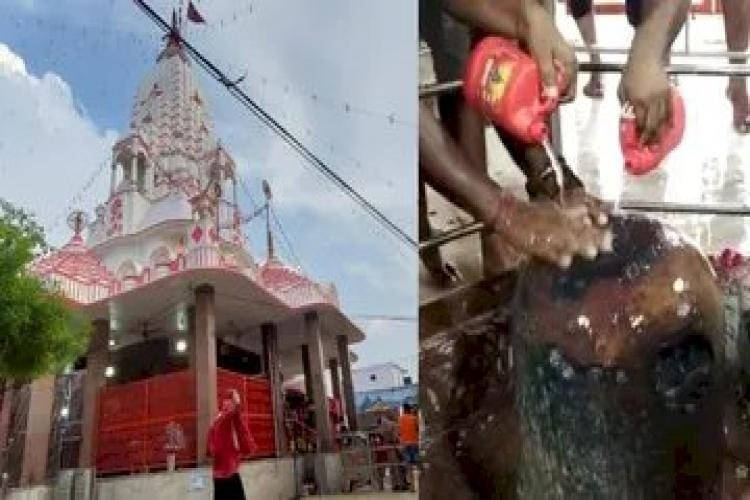 By the way, every day of Shravan month is holy in itself. But the coming Monday this month, Pradosh fast and monthly Shivratri have special recognition. During this, there is a huge crowd of devotees in Shiva temples. Today in the month of Sawan, we will tell you about Parshurameshwar Puramahadev Temple, which is located near the Baghpat district of Uttar Pradesh and is the center of faith of the people. Every year a four-day fair is organized here on Shivaratri of Shravan month. It is called Kanwar Mela. During this, lakhs of Kanwariyas walk barefoot from Haridwar to bring Ganga water and perform Jalabhishek of Mahadev. These kanwariyas do not see their suffering in front of Mahadev's devotion. While traveling barefoot, the Kanwariyas are neither worried about blisters on their feet nor about the monsoon rains. The urge to get a glimpse of Puramahadev and perform his Jalabhishek is always on. Let's know the glory of Puramahadev temple.

Parashuram had established this Shivling
This temple of Mahadev is built on the banks of the Hindon river in Pura village, 25 km from Baghpat district headquarters. It is said that sage Jamadagni used to stay with his wife Renuka at this place. It is said that at this place Parashurama beheaded his mother Renuka as per the orders of his father Jamadagni. After this, to repent, he established Shivling at this place and did severe penance for Shiva. Pleased with the tenacity of Parashurama, Shiva appeared to him and revived his mother. Also, Lord Shiva gave an ax to Parashurama, from which he killed the Kshatriyas 21 times. This temple is known as Parashurameshwar Pura Mahadev Temple because of being at a place called Pura and the establishment of this Shivling by Parashurama.

The queen had built the temple
Over time that place turned into ruins and Shivling also got buried in the soil somewhere. It is said that once the queen of Pandora went out for a walk, her elephant stopped at that place. Even after lakhs of efforts, the elephant was not ready to move forward. On this, the queen was very surprised and she ordered to excavate that place. While excavating the mound, this Shivling was found from there. After this, the queen built a grand temple there.

Kanwar fair has started from today
Today this temple remains the center of the special faith of the devotees. Every year on Sawan Shivratri, a four-day Kanwar fair is organized here. This year's Kanwar Mela started on Monday, July 25, and will continue till July 28. Meanwhile, a huge crowd of Kanwariyas gathers here, for whose arrangement the administration has to make special arrangements. For the first time after Corona, a fair is being held in the Pura Mandir of Baghpat. In such a situation, about 30 lakh Kanwariyas are expected to come to the temple and perform Jalabhishek. Meanwhile, the administration will shower flowers on the Kanwariyas on the temple premises by helicopter and ATS commandos have also been deployed in the temple for security. Apart from this, the security system will be monitored here with drones and helicopters.

This is to say of the priest of the temple
It is said that every wish sought in this temple is fulfilled. Pandit Jai Bhagwan, the chief priest of Parshurameshwar Pura Mahadev Temple, tells that kanwariyas and devotees are reaching the temple daily to perform Jalabhishek. Looking at the crowd, it seems that the number of Kanwariyas and devotees will break the record this time. According to the priest, flag hoisting will be done here on July 26 at 06:48 pm.
More about this source text

Instruction Of Deputy CM Brajesh Pathak, To Increase The Counters For Making Med...

Vishwarajsinh Chudasama is a Public Figure & a Social W...

Make A Simple Dress Stylish With These Styles Of Dupatt...

Mother Lakshmi The Goddess Of Wealth And The God Kubera...