Morbi Bridge collapsed: A case of culpable homicide has been registered against the Bridge Management Company. An investigation has been started under the leadership of an IGP rank officer. This bridge was running closed for the last several months, which was repaired and opened just five days ago. 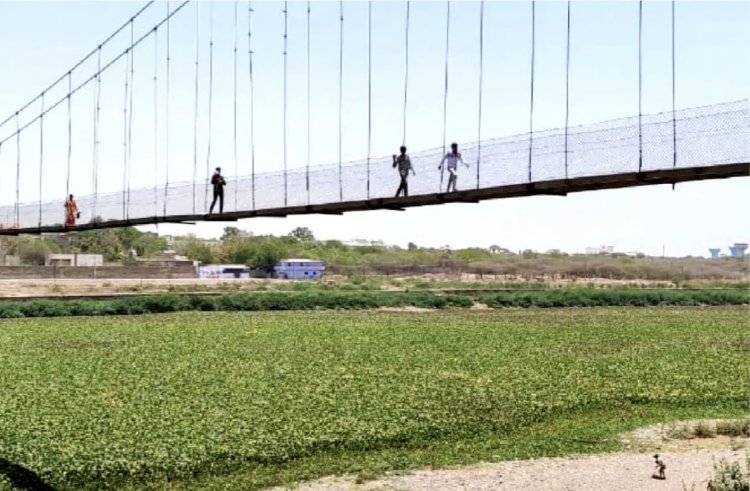 The cable bridge over the Machhu river suddenly collapsed in Morbi, Gujarat on Sunday evening. So far 141 people have lost their lives in this accident. At the same time, a total number of people is still said to be missing. 70 injured are undergoing treatment. So far more than 170 people have been rescued. The rescue work continued throughout the night to save the people. After this accident, a case of culpable homicide has been registered against the Bridge Management Company. It is being told that due to the arrival of more people on this bridge, the bridge broke down. It is being alleged that more people were allowed to go on the bridge due to ticket earnings.

According to Gujarat COO, rescue and relief operations are being carried out with 50 Indian Navy personnel, 3 NDRF squads, and 30 Indian Air Force personnel. Apart from these, 2 columns of the army and 7 teams of fire brigade have come to Morbi with advanced equipment from Rajkot, Jamnagar, Diu and Surendranagar. Along with them, these people are cooperating in the rescue.

The Gujarat government has constituted a Special Investigation Team (SIT) to probe the bridge collapse incident in Morbi town. At the same time, a case of culpable homicide has been registered against the Bridge Management Company. State Home Minister Harsh Sanghvi said on Monday morning that a criminal case has been registered in this matter. An investigation has been started under the leadership of an IGP rank officer.

It is being told that due to the repair of the bridge, it was closed for the last six months. It was reopened to the public on October 25, the second day of Diwali. About Rs 2 crore was spent on its repair. The maintenance of this bridge is currently with the Odhavji Patel-owned Orewa Group. This group had entered into an agreement with Morbi Municipality for 15 years from March 2022 to March 2037.

Pakistan will come on the path of revolution, if not through ballot box, then th...

'Best time for India, need to run save earth campaign',...

The Water Level Of Ganga-Yamuna In Prayagraj Rising By ...

One death due to Corona in Delhi, CM Kejriwal called a ...