Another big upset in FIFA, South Korea defeating Portugal in pre-quarterfinals after 12 years

FIFA World Cup 2022: Portugal, one of the most dangerous teams in the world, has been beaten 2-1 by South Korea to enter the quarter-finals of the FIFA World Cup 2022. At the end of the match, Hwang Hee-chan scored a brilliant goal to take South Korea to the knockout round after 12 years. At the same time, in the second match, Uruguay's team got eliminated even after winning against Ghana. 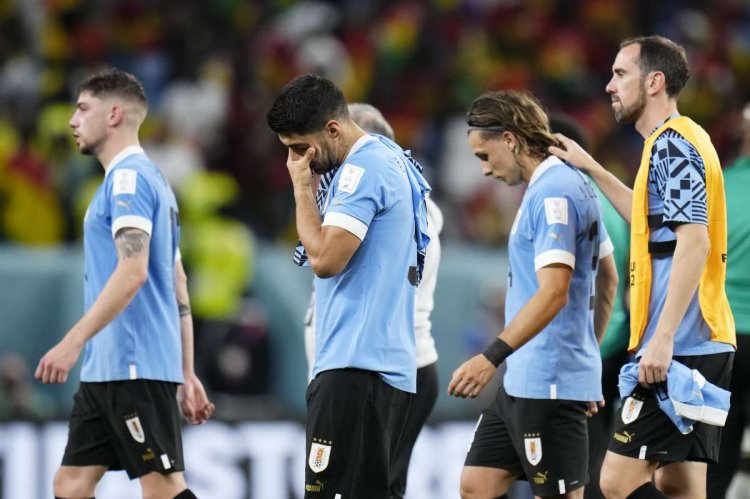 Under the FIFA World Cup 2022, a big upset has been seen at the end of the group round. Portugal, one of the most dangerous teams in the world, has been beaten 2-1 by South Korea to enter the quarter-finals of the tournament. Hwang Hee-chan scored a brilliant goal in the dying moments of the match to help South Korea reach the knockout stage after 12 years. In the FIFA World Cup, there were two big matches in Group H on Friday. One was between Portugal and South Korea, captained by Cristiano Ronaldo, while the other match was played between Ghana and Uruguay. After both matches, Portugal and South Korea advanced from Group H to the pre-quarterfinals.

In fact, Cristiano Ronaldo's Portugal team had already secured their place in the knockouts by winning both the opening matches, but Portugal suffered a big upset at the hands of South Korea in the third match. The Korean team defeated the Portuguese team by 2-1. Despite the defeat, Portugal reached the knockout rounds by topping Group H, while South Korea also booked their place in the pre-quarterfinals by finishing second in the group.

Ricardo Horta of Portugal scored the first goal of the match played between Portugal and South Korea. Horta gave Portugal the lead in the 5th minute. After this, South Korea scored a goal in the 27th minute to equalize the match. This goal was scored by Kim Eung Gwon. Thus the first half ended in a draw. After this, in the second half, Korea performed a strong game and Hwang Hee-Chan scored a goal in the 90+1 minute to give the team victory.

At the same time, in the match played between Uruguay and Ghana, Uruguay showed a strong game from the beginning. In the first half itself, Jorgen de Arrasqueta gave Uruguay a 2-0 lead with brilliant play. He scored two goals in the 26th and 32nd minutes of the first half, but despite this Uruguay could not qualify for the knockouts. The first goal of the match was brilliant. In the 26th minute, Uruguay's Luis Suarez had a shot for the first goal, but the ball could not penetrate the goalkeeper. Taking advantage of the opportunity, Arrasketa scored the goal immediately when the ball went past the goalkeeper.

South Korean YouTuber had lunch with the boys who saved him

Gujarat Election: Today is the last day of campaigning for the second phase, vot...

Kohli, Rodrigues, And Sharma Nominated For The ICC Play...

Rajat Patidar, A Contender For Entry In Team India, Sco...

Team India Will Be Seen In The New Jersey In The Asia C...

Another big flight of Udanpari: PT Usha became the firs...