An Indigo flight has made an emergency landing at the Delhi airport. The flight was taking off from Delhi to Bangalore when a spark started emanating from the right wing of the flight. The video of this incident is also going viral on social media. 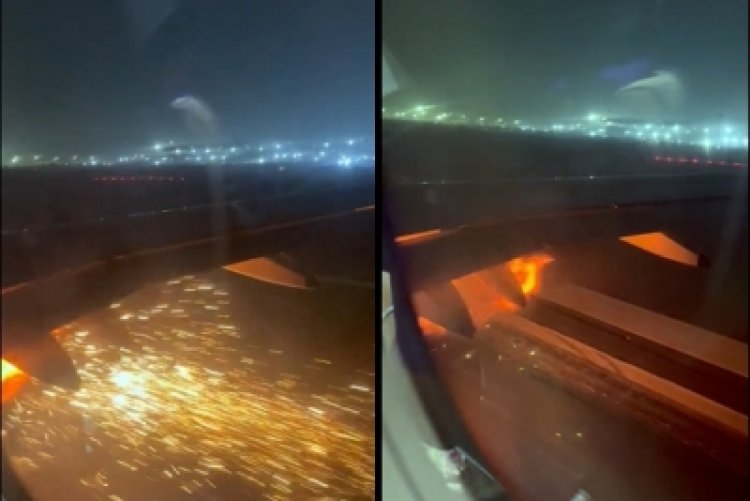 A major accident was averted in the Indigo plane at the Delhi airport, the capital of the country. Indira Gandhi International Airport: An IndiGo plane flying from Delhi to Bengaluru had to ground at the Delhi airport after one of its engines caught fire. The incident caused a stir among the passengers. During take-off, a spark started rising in the aircraft's engine. After this, a state of emergency was declared at the Delhi airport and an emergency landing was made. However, now the government has taken action on this incident.

A flight was taking off from Delhi to Bangalore when a spark started emanating from the right wing of the flight. After this, the flight took off. An emergency landing was made immediately after the spark emanated from the wing. Flames were seen in the right wing of Indigo Airlines flight 6E 2131. It is being told that 177 passengers were on board the plane. The video of this incident is also going viral on social media.

Regarding the incident, Indigo Airlines issued a statement saying that aircraft 6E2131 flying from Delhi to Bengaluru encountered a technical problem during the take-off roll. Soon after, the pilot aborted the take-off. All passengers and crew members are safe. We apologize for the inconvenience caused to the passengers.

An inquiry has been ordered into the incident of fire during the take-off of the Indigo flight at Delhi airport. The Civil Aviation Ministry has directed DGCA officials to initiate a probe into the fire incident on IndiGo flight number A320.

In the last few months, the incidents of technical glitches in SpiceJet and Indigo flights have increased. Recently, due to a technical fault, emergency landings of many such flights were made, which are already under the purview of DGCA's investigation. In July itself, the DGCA had also sought clarification from SpiceJet on such incidents.

Big loss in LIC's stock so far? Now the company will benefit investors through b...

SBI Life’s ‘Thanks A Dot’- aBreast Cancer Awareness initiative steps in to...

PFI leader arrested for killing RSS worker, many other ...