Vande Bharat Express train became a victim of an accident, the front part was broken after hitting the cattle

Vande Bharat Express train has once again become a victim of an accident. The accident happened near the Atul railway station in Valsad, due to which the front portion of the train broke down once again. Railways said that after this accident the train was stopped for 15 minutes. 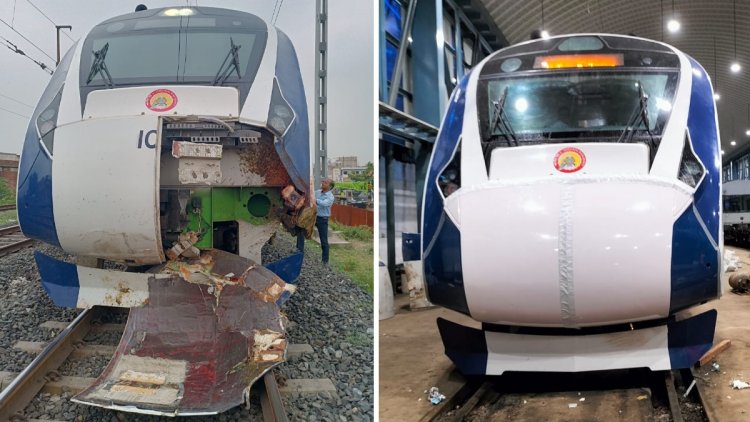 Now, this is the third time when Vande Bharat Express has become a victim of a train accident. It has been told by the Indian Railways that 'Today Vande Bharat Express train collided with cattle near Atul railway station in Valsad, which was going from Mumbai Central towards Gandhinagar. The train was halted for about 15 minutes after the accident.

Earlier, when Vande Bharat Express was a victim of a train accident, questions were raised on the strength of the train, about which Railway Minister Ashwini Vaishnav was questioned. Responding to these questions, Railway Minister Ashwini Vaishnav said that "The track is on the ground in most parts of India. Due to this, cases of animal collisions keep coming. The train has been designed in the same way to deal with it." The train is sturdy, its design is global. The front part is made in such a way that if there is any breakage, it can be repaired immediately."

SBI Life’s ‘Thanks A Dot’- aBreast Cancer Awareness initiative steps in to...

Ipsos made many claims based on the survey: Indians worry about unemployment, co...

India Needs To Have A Specific Law To Prevent Child Tra...

Entry will not be available in India without RT-PCR tes...

Difficulties will increase for Joshimath, Meteorologica...