Companies of India and South Africa together demolished the twin tower of Noida; Won many awards for demolishing

After the order of the Supreme Court, the twin tower of Supertech located in Noida was found in the soil. Both towers with a height of more than 100 meters took only 9 seconds to fall. The specialty of the explosion technique adopted to demolish the twin tower is that it did not damage any building to nearby buildings. 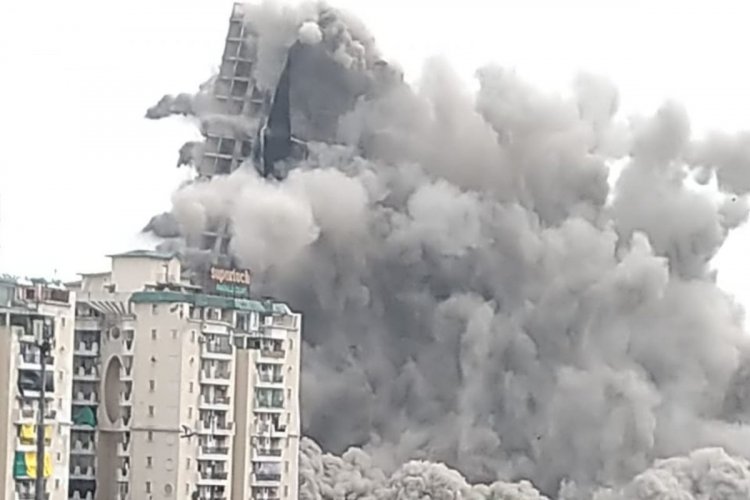 Today at 2:30 pm, the illegal twin tower of Supertech Limited Company built in Noida was demolished. On the directions of the Supreme Court, the twin towers of Supertech Emerald Court located in Sector-93A were grounded after the blast. Following the order of the Supreme Court, the date of demolition of the Noida Twin Tower was fixed on 28 August 2022. India's Edifice and South African company Jet Demolition got the task of demolishing these sky-high towers. The blast technique used to demolish the twin towers did not damage any nearby buildings. Perhaps this must have been the reason that these companies have got awards for their kind of work.

To demolish the Apex and Cyan towers in Sector 93A of Noida, 3700 kg of explosives were planted in different parts of the building. One of these towers was 29 storeys and the other was 32 storeys. The implosion technique was used to bring down the tower. With this technique, there is a controlled blast, that is, an explosion after which things get compressed inwards. Simply put, the bars will not break into it, but their mouth will open from above and the debris will remain inside them.

To successfully use the implosion technique, 9800 shots were fired in both the towers and about 1400 grams of gunpowder was injected into each hole. Altogether 3700 kg of gunpowder was filled in the holes made in the buildings. At the same time, when the blast was done, both the towers built in the midst of a dense population collapsed in their place and only a cloud of dust could reach the nearby buildings.

It took just 9 seconds to demolish both the buildings of corruption built in 13 years. During the demolition, South African mining engineer Joe Brinkman, Martins, Kevin Smith and project manager Mayur Mehta, Indian blaster Chetan Dutta and a senior police officer were present. The demolition of the building was mainly done by Edifice Engineering Company. Edifice Company has an agreement with Jet Demolition of South Africa.

African company Jet Gemolation has received 5 awards for difficult demolition. It has demolished the 108-metre-high Bank of Lisbon building in Johannesburg, a power station in South Africa itself, and a densely populated 14-storey twin tower in the capital, Pretoria. Talk about the Indian company Edifice, then this company has demolished the Old Motera Stadium in Gujarat. World-renowned company Edifice Engineering was also entrusted with the demolition of the twin towers as they have expertise in the safe demolition of tall buildings.

Preparations were going on for the last 6 months for the demolition of the Twin Towers. From February 21, 350 workers and 10 engineers were engaged in this work. Indian blaster Chetan Dutta smashed the Twin Towers in a few seconds at the press of a button. Indian blaster Chetan Dutta was present within a radius of 100 meters from Edifice Company. Chetan Dutta has an experience of 20 years in this field. He has been doing blasting work in Rajasthan, Panipat in Haryana and Uttarakhand.