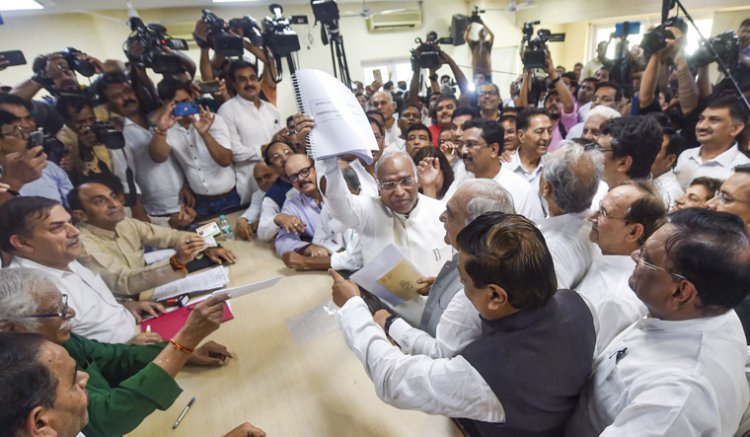 Who will be the next president of the country's oldest party Congress, it has been decided to a great extent now. The process of nomination for the post of party president was completed today. Rajya Sabha Leader of Opposition Mallikarjun Kharge, senior Kerala MP Shashi Tharoor and former Jharkhand minister KN Tripathi have filed their nominations for the post of Congress President. Any one of these three will be elected the next president of the party. However, in view of the hustle and bustle during the nomination and the support of the leaders, Mallikarjun Kharge's election as the Congress President seems almost certain.

The process of nomination for the post of Congress President was completed today at the Congress Headquarters in Delhi under the leadership of senior Congress leader and Chairman of the Central Election Authority of the party Madhusudan Mistry. Regarding the nomination process, Madhusudan Mistry said that 14 forms have been submitted by Mallikarjun Kharge, 5 forms by Shashi Tharoor and one form by KN Tripathi. Tomorrow we will check the forms. After this, the valid candidate and form will be informed by Saturday evening. The names of the final candidates will be announced after scrutiny of the nomination papers.

Madhusudan Mistry further said that none of these three candidates is the official candidate of the party. All three are contesting the elections on their own. Congress President Sonia Gandhi has already made it clear that she will remain neutral in this entire process. If someone claims to be with them then it will be wrong. It should be noted that the last date for withdrawal of nominations is October 8. Voting will be held on October 17 and the new Congress President will be announced on October 19.

Senior Congress leader and AICC member from Kerala Shashi Tharoor has filed his nomination papers. Many Congress workers were with him during his nomination, but no big leader appeared with him. Earlier it was believed that Tharoor had the support of Congress's G-23. But during Tharoor's nomination, no G-23 leader was seen with him.

Ayushmann Khurrana reduced fees because movies are flopping? now earning so much

PFI had hatched a conspiracy to attack Prime Minister M...

One woman killed, 4 injured due to landslide in Rampur'...

First meeting of G-20 in Kolkata from today, representa...

Another Bihari labourer was killed in Kashmir, and terr...