A young man from Gujarat has spent lakhs of rupees to paint his car in tricolour on the theme 'Har Ghar Tricolor', whose name is Siddharth Doshi. Siddharth told that he has come to Delhi from Surat (Gujarat) and wants to meet Prime Minister Narendra Modi and Home Minister Amit Shah. 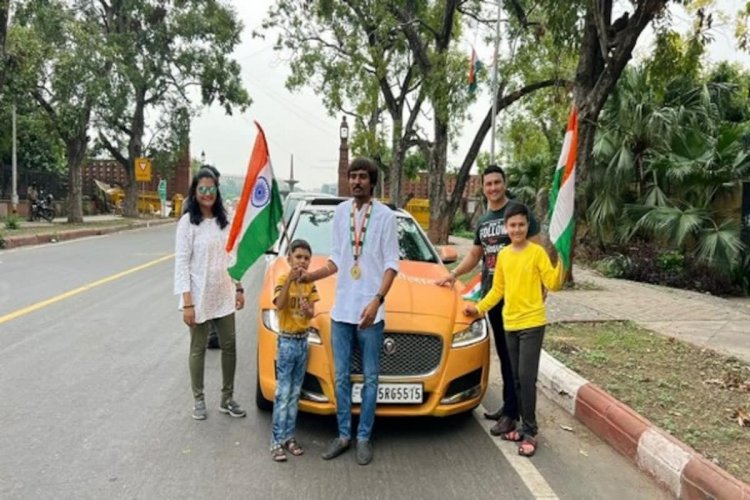 India is celebrating 'Azadi Ka Amrit Mahotsav' on the joyous occasion of 75 years of independence. Under this, many programs are being organized across the country. Along with this, Prime Minister Narendra Modi has appealed to the people to hoist the tricolour in every house. After which other people including ministers, leaders, MPs, MLAs, and Chief Ministers are also hoisting the tricolour in their respective homes and sharing their photos through social media. On the other hand, Gujarat's youth 'Siddharth Doshi' has painted his car on the theme of 'Har Ghar Tiranga'.

Siddharth Doshi while talking to the news agency told that he has painted his car in the tricolour colour to spread awareness about the Har Ghar Tricolor campaign among the public, which he has reached from Surat in Gujarat and has now reached Delhi. Siddhartha has expressed his desire to meet Prime Minister Narendra Modi and Home Minister Amit Shah.

Siddharth Doshi, who painted his car in tricolour on the theme 'Har Ghar Tiranga', said that the way Prime Minister Narendra Modi has started the Amrit Mahotsav campaign of Azadi, it is a matter of pride for every Indian.

In front of Vijay Chowk in Delhi, Siddharth appealed to the people to join the 'Har Ghar Tiranga' campaign. Along with this, Siddharth said that I am very impressed with the initiative of PM Modi. I wanted to meet PM Narendra Modi and Home Minister Amit Shah. For this, I have asked him for time.

One MLA pension scheme: Big leaders of Punjab including Captain will get financi...

PM Modi has assigned a new task to Indians, this time h...

Uproar in Delhi over removal of slums, AAP's protest in...