Kareena Kapoor Khan came out alone in the swag, someone pulled her hand in the crowd and someone took off her purse!

A video of the Pataudi family's daughter-in-law Kareena Kapoor Khan is becoming increasingly viral, in which the actress is seen alone at the Mumbai airport. Not only this, on seeing him alone, people harassed her for selfies. 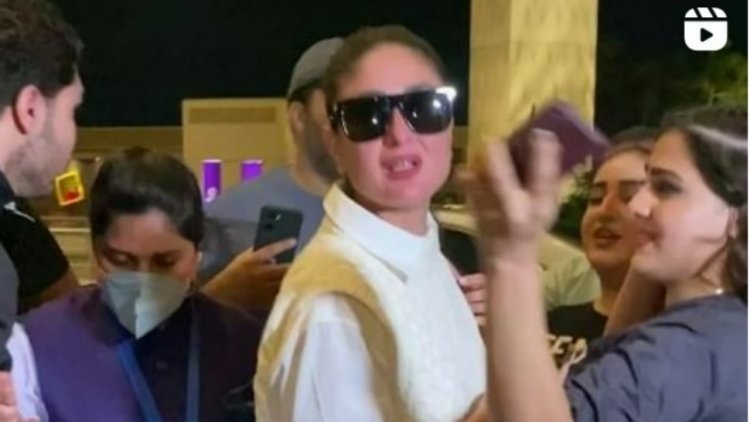 A video of Kareena Kapoor Khan, the daughter-in-law of Bollywood actress and Pataudi family, is becoming increasingly viral on social media, leaving no one surprised after seeing it. Actually, you must have seen most of celebrities with bodyguards at the airport, who do a great job of saving them from the crowd, but nothing like this happened to Kareena Kapoor, because the actress was singled out at the airport. Not only this, but after seeing her, her fans could not stay away and crowds gathered to take selfies with the actress. During this, Kareena Kapoor appeared in a white outfit. At the same time, he had tied his hair and was wearing goggles.

His fans are quite surprised after the video surfaced. In the video, just like Kareena has to get off her car, her fans get very excited after not finding bodyguards around her and crowds gather to take selfies with her. In such a situation, someone stops them and takes a selfie, is seen running after them, then someone is seen taking a selfie from the front.

Not only this, even his purse is pulled into the crowd. In the viral video, Kareena is also seen as very angry and is also trying to run away from there. In the video, the actress can be clearly seen getting upset amidst a crowd of people. This video of him is becoming increasingly viral. Also, after the video surfaced, people are telling such antics wrong.

Apart from this, Kareena Kapoor herself is very active on social media and keeps sharing photo videos with her family and friends with her million fans. Along with this, she also likes to spend a lot of her time in yoga, whose photo videos the actress has been sharing with her fans.

Kareena Kapoor was last seen in the film 'Lal Singh Chaddha' with Aamir Khan, but the film proved to be a big flop at the box office. There was a lot of anger among the people regarding some old statements of the stars of the film, after which there was a lot of trend on social media #BoycottLaalSinghChaddha regarding their film.