KN Tripathi, who left the Air Force and joined politics, filed nomination for the post of Congress President

Former Jharkhand minister KN Tripathi, who left the Indian Air Force and joined politics, has filed his nomination for the post of Congress President. Talking to the media after filing his nomination, KN Tripathi said that the party leaders will respect whatever decision is taken. 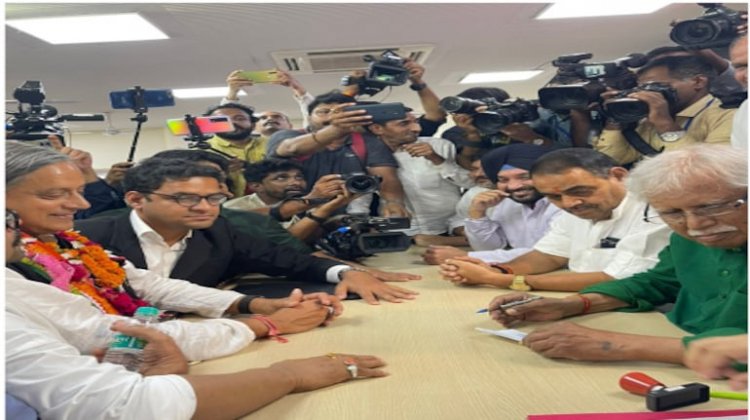 Congress leader and former Jharkhand minister KN Tripathi filed a nomination for the post of Congress President on Friday i.e. today. Talking to the media, KN Tripathi said that our leaders Sonia Gandhi and Rahul Gandhi have said that every Congress worker can contest for this big post. Along with this, he said that "Our leader Sonia has given up the posts of Prime Minister and party president. I have filed my nomination for the post of party president today. Whatever decision of the party leaders will be respected.
Congress MP Shashi Tharoor and Leader of Opposition in Lok Sabha Mallikarjun Kharge have filed their nominations for the post of party president. The three leaders filed their nominations for the post of Congress President after reaching the Congress headquarters in Delhi.
KN Tripathi has left the Indian Air Force and joined politics. He contested for the first time in the year 2005 from the Daltonganj assembly constituency on a Congress ticket. However, he had to face defeat in this election.
KN Tripathi won the 2009 assembly elections on a Congress ticket, after which he was made Minister of Rural Development, Panchayati Raj and Labor Department in the Jharkhand Government. Along with this, he has also served as the National President of the Indian National Trade Union Congress.
Slogans were raised in support of Sachin Pilot at the Congress headquarters in Delhi amid the ongoing ruckus for the post of Congress President. The supporters of Sachin Pilot raised slogans of 'Desh ka youth leader Sachin Pilot Zindabad'. After this, while talking to the news agency, supporters said that Sachin Pilot is aware of the ground-level disturbances. He knows about the problems of all the workers. That's why we all demand a young leader like Sachin Pilot is made the president of the Congress party.

Retired Lt. General Anil Chauhan gets the command of CDS,...