A speeding truck carrying sand rammed into a traveller bus in Salem, Tamil Nadu. 6 people died tragically in this accident. The injured person has been admitted to the Government Hospital in Salem. 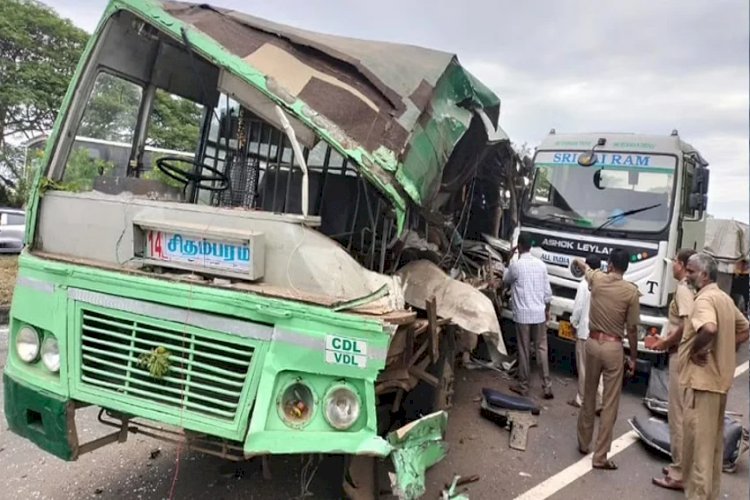 A horrific road accident took place near Attoor in Tamil Nadu's Salem district. In the collision between the bus and the truck, 6 people were killed and several others were seriously injured. Among the dead, 3 people are said to be from the same family. Police reached the spot as soon as the incident was reported. The bodies of the deceased were taken and sent for post-mortem. At present, the police are involved in the investigation of the case.

According to the police, a speeding truck carrying sand rammed into a traveller bus in Salem. 6 people died tragically in this accident. It is being told that these people were going to Chennai to attend a function at Bethanayakanpalayam in a traveller.

It is being told that the bus was stopped in the Ethapur area and the cleaners were keeping the luggage in the car along with the passengers. During this, the truck coming from behind at a high speed hit the bus strongly. In this incident, 5 people died on the spot while a woman succumbed to her injuries during treatment at the hospital.

Vajpadi DSP N Shweta said, five persons including Thirunavukkarasu, Ravikumar, Senthil Velan, Subramani and Deepan died immediately due to serious injuries. Vijaya suffered a serious head injury and died on the way to a government hospital for treatment. The truck driver is absconding after the incident. The police are investigating the matter

Mandatory requirement of face masks during air travel is...