One must take precautions while changing their name to avoid adverse consequences: Numerologist JP Tolani 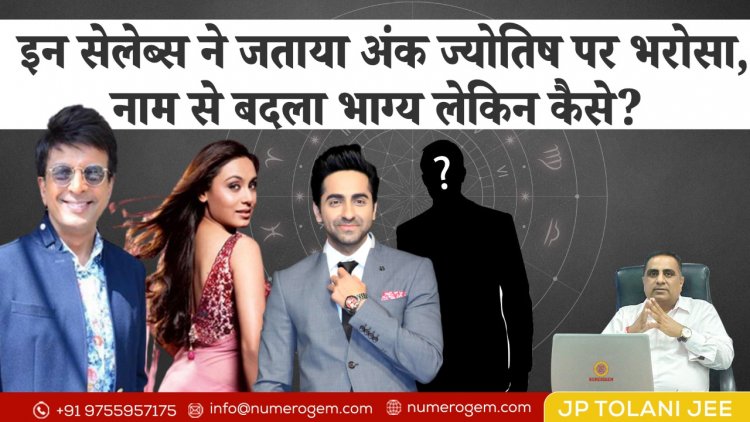 One must take precautions while changing their name to avoid adverse consequences: Numerologist JP Tolani

India is a spiritual country. Spirituality, culture, and Sanskrit language can be called its soul. World-renowned numerologist JP Tolani explains that since ancient times, Indians have always shown interest to unravel the secrets of the mysterious destiny to see a glimpse of their future. This curiosity led to the birth of astrology in India. Astrology claims to discern information about human affairs and terrestrial events by studying the apparent positions of celestial objects- particularly the planets and stars. However, in this sequence it was also realized that along with planets, numbers also play an important role in human life, and studies are going on for thousands of years to know its secret and power. Astrology has well understood the importance of numbers, and the importance of numerology has grown rapidly with its awareness.

Symbolic numbers from one to nine are related to the planets. Numerology and astrology are related to each other. Nowadays, people are taking the help of numbers using numerology to complete their businesses. Not only the common public, but many well-known personalities of the country and abroad are also expressing faith in numerology. Many Bollywood celebrities have succeeded in changing their destiny with the help of numerology. From Bollywood's Singham Ajay Devgan to Ayushmann Khurrana, they have changed their fate by changing the spelling of their names. Renowned actor, Rani Mukerji changed her last name from Mukherji to Mukerji. Apart from this, Anna Sunil Shetty, who even after crossing the age of 60, is the epitome of fitness. Earlier he used to write his name as Sunil but later changed it to Suniel. Not to forget, multi-talented actor Javed Jaffrey, changed his name from Javed Jaafery to Javed Jaffrey. Javed dropped A from his surname and added F.

Significance of time while changing the name
According to JP Tolani, the time during the process of changing the name holds special significance. Tushar Kapoor and Vivek Oberoi are some of the examples among Bollywood celebs who did not keep track of the timings or the coming cycles and did not get the desired results. Rajkumar Rao is the perfect example of this. Actor Rajkumar Rao, who garnered a lot of accolades for his strong acting, also changed the spelling of his name. Earlier he used to write Rajkumar but later he changed it to RajKummar. This helped him get success till 2018 but as he did not pay attention at the time of changing his name, he had to struggle to give good hits after 2018. At the same time, Karisma Kapoor had dropped H from her name. Earlier she used to write Karishma, whereas now she writes Karisma, and this gave her desired results for a time being.

The special importance of Birth Number and Destiny Number

Peace, Harmony and Humanity Are Core Values; that’s Why...

Beat Prediabetes Initiative for India launched by the International...

Harvard HPAIR, in Partnership with Learn with Leaders,...