Pak and Afghan fans clashed after the match, kicked and punched each other, beat each other with chairs

Asia Cup 2022 Pakistan-Afghanistan fans clash: After the match, some videos are going viral on social media. In this, the fans of Pakistan and Afghanistan are seen abusing, pushing and beating each other. In the video, the fans are hitting each other and causing much damage to the Sharjah Stadium. 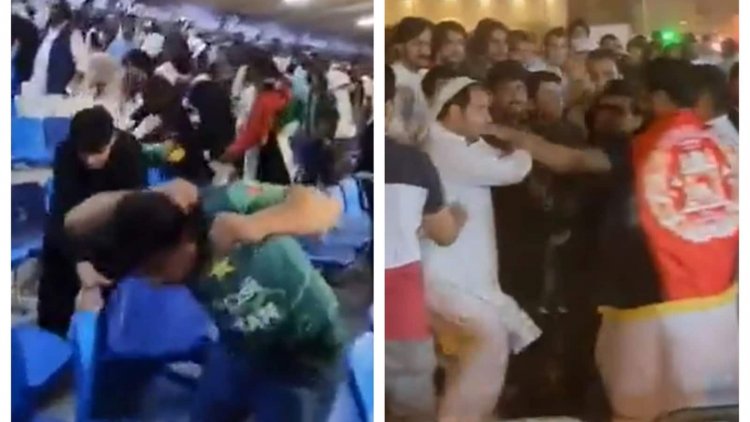 The fourth match of Super 4 of Asia Cup 2022 was played between Pakistan and Afghanistan. In this match, Pakistan defeated Afghanistan by 1 wicket with the help of Naseem Shah's best two sixes in the last over. With this defeat, Afghanistan is out of the Asia Cup. At the same time, India's hopes of going to the final have also suffered a setback.

After the match, some videos are going viral on social media. In this, the fans of Pakistan and Afghanistan are seen abusing, pushing and beating each other. In the video, the fans are hitting each other and causing much damage to the Sharjah Stadium. Accusing Afghanistan fans of violence, former Pakistan fast bowler Shoaib Akhtar wrote on Twitter, 'Afghan fans are doing this. He has done this many times before. It is a game and it should be taken in the right way. Akhtar, tagging former Chief Executive Officer of Afghanistan Cricket Board (ACB), Shafiq Stanikzai, further wrote, 'Your crowd and your players need to learn a few things if they want to move forward.

In Shahjah's stadium itself, the Afghan fans started breaking and uprooting the chairs. Due to this, there has been heavy damage to the property of the stadium. They uprooted the chairs and threw them to the Pakistani fans. The video of this incident is also becoming quite viral on social media.

In the match too, there was a lot of heat among the players. Fast bowler Farid Khan dismissed Asif Ali (16) in the 19th over to give Pakistan the 9th blow at 118. After which both the players exchanged words. During this, Asif waved his bat close to Farid's face. After which both of the players of Afghanistan were separated.

Let us tell you that Pakistan had lost nine wickets till the 19th over while chasing the target of 130 runs. In the last over, he needed 11 runs to win but 19-year-old fast bowler Naseem Shah, who was on strike, hit left-arm pacer Fazal Farooqui for two consecutive sixes in the first two balls to take his team to the final and India out of the tournament. done.