S Jaishankar Became The First Foreign Minister Of India To Visit Paraguay, Know The Special Things Related To The Tour

External Affairs Minister S Jaishankar concluded his first official visit to Paraguay on Monday. During this, he jointly inaugurated the newly opened Indian Embassy in the capital city of Asuncion with his Paraguayan counterpart Julio Cesar Arriola. 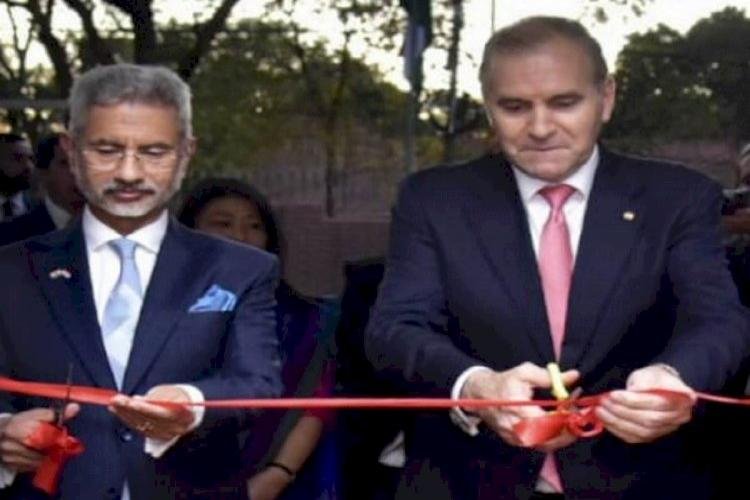 External Affairs Minister S Jaishankar concluded his first official visit to Paraguay on Monday. During this, he jointly inaugurated the newly opened Indian Embassy in the capital city of Asuncion with his Paraguayan counterpart Julio Cesar Arriola.

Jaishankar wrote on Twitter, 'Jointly inaugurated the new Indian Embassy in Paraguay with Foreign Minister Julio Cesar Ariola. Interior Minister Federico A. Thanks to González(Federico A. González) for his presence. Our strong bilateral ties and our long-standing multilateral cooperation have been reiterated.

Confident that this new resident mission will take the India-Paraguay relations to greater heights.

A press release from the Ministry of External Affairs said, "External Affairs Minister (EAM) Dr. S Jaishankar paid an official visit to the Republic of Paraguay from 21-22 August 2022 and inaugurated the newly opened Indian Embassy in Asuncion. The inauguration was attended by dignitaries including the Home Minister of the Government of Paraguay, Federico A. Gonzalez. Other guests included the diplomatic corps in Paraguay, the business community, and the Indian diaspora. This was the first visit by an Indian External Affairs Minister to the Republic of Paraguay after the completion of the 60th anniversary of the establishment of diplomatic relations between the two countries.

The External Affairs Minister unveiled a statue of Mahatma Gandhi in Paraguay on Sunday and hailed the Asuncion Municipality's decision to place it on the city's main waterfront. EAM also paid tribute at the National Pantheon of Heroes and remembered the sacrifices of Paraguay's national heroes. In addition, the Foreign Minister also visited the historic Casa de la Independencia, from where Paraguay's independence movement began more than two centuries ago.

Jaishankar met the President of the Republic of Paraguay, Mario Abdo Benitez, at the Rashtrapati Bhavan on Monday during his two-day visit.


Paraguayan Foreign Minister Julio Cesar Arriola welcomed the Foreign Minister in Asuncion and had 'productive' talks with his Paraguayan counterpart.
During this, the two leaders discussed new areas of cooperation and exchanged views on the situation in the world.
They also exchanged views on regional and global matters and agreed to continue to support each other in multilateral fora and promote a rules-based international order.
Both sides agreed to strengthen their cooperation in various fields including trade and commerce, agriculture, pharmaceuticals, traditional medicines, technical and development cooperation, solar energy, and MERCOSUR.
Jaishankar underlined that the supply of vaccines during the COVID pandemic was a statement of solidarity by India.
He also addressed a business meeting at the Industrial Union Paraguay in the presence of Luis Alberto Castiglioni, Minister of Commerce and Industry of Paraguay.
The Foreign Minister thanked Luis Castiglioni for his participation.
S Jaishankar expressed confidence that Indian businesses would be largely active in Paraguay.
He also invited companies from Paraguay to explore opportunities in India, adding that the establishment of a resident Indian embassy would expand our economic engagement.
The External Affairs Minister said that trade and investment will be the focus of our bilateral activities.
External Affairs Minister is on a three-nation tour

Thanks to the ambassadors of LAC countries

Travel on Yamuna Express will be expensive, toll tax will increase from Septembe...

The blend of AI and Forex Trade, Sit back and let Ojasvi earn for you

Big action on Google, CCI fined 936 crores for this rea...

Big accident in Rajasthan, blast in cylinders during ma...