Biden turned his back on the resolution condemning Russia in the United Nations Assembly, after getting 143 votes

India has played out his friendship with his evergreen friend Russia. A censure motion against Russia was introduced and voted on in the United Nations General Assembly yesterday. India kept itself away from this voting. 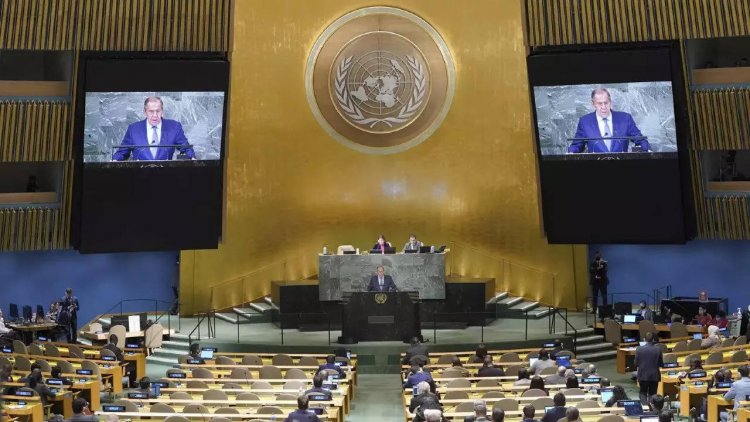 US President Joe Biden on Wednesday hailed the United Nations General Assembly (UNGA) adopting a resolution condemning Russia's annexation of four Ukrainian territories. President Biden said in a statement issued by the White House that after detailed discussions it was voted to defend the UN Charter and condemn the illegal attempt by Russia to annex Ukrainian territory by force. In the current vote, 143 countries voted against Russia, which is more than the 141 votes cast in March 2022 to explicitly condemn the war to invade Russia.

India has once again played its friendship with Russia. A censure motion against Russia was introduced and voted on in the United Nations General Assembly yesterday. India kept itself away from this voting. However, expressed deep concern over the escalation of the conflict in Ukraine. India reiterated the statement of Prime Minister Narendra Modi in which he had given a message to end this fight through dialogue.

In a resolution tabled in the United Nations General Assembly, Russia's occupation of Donetsk, Kherson, Luhansk and Zaporizhzhya in Ukraine has been declared illegal. According to the censure motion, it has no validity under international law. Let us tell you that in the 193-member General Assembly, 143 countries voted in their support. 5 countries exercised their franchise against it. At the same time, 35 countries including India kept themselves away from voting.

India's Permanent Representative to the United Nations Ruchira Kamboj said that the decision to abstain from voting on the censure motion was in line with our national position. He said other issues were also going on simultaneously. Some of them are not adequately addressed in the proposal. "My prime minister has clearly said that this cannot be an era of war. With this determination to strive for a peaceful solution through dialogue and diplomacy, India has decided to abstain from voting.

Kamboj said that India is concerned about the escalation of conflict in Ukraine. The civilian infrastructure there is going to be targeted. People are dying. He said, "We have consistently advocated that no solution can ever be found at the cost of human life. It is in no one's interest to escalate hostility and violence. We have urged that hostilities should be terminated immediately and All efforts should be made to immediately return to the path of dialogue and diplomacy.

He said that dialogue is the only answer to resolving differences and disputes and the way to peace. India said, "We need to keep all channels of diplomacy open. We sincerely look forward to the early resumption of peace talks so that an immediate ceasefire and conflict resolution can be achieved. Ready to support all efforts.