Rajnath Singh's grand welcome to General Bajwa in America, how much is it a matter of concern for India?

Pakistan Army Chief US Honor Cordon: Pakistan's Chief of Defense Staff General Bajwa is reaching America. Here America is hosting them for a week in a grand manner. It is being told that US Defense Minister Lloyd Austin will give a grand welcome to the Pakistan Army Chief at the Pentagon today in the same way as he did to India's Defense Minister Rajnath Singh in April. Analysts say that the US is working on Plan B to answer India's maintaining friendship with Russia. Some signs of this have started to appear. 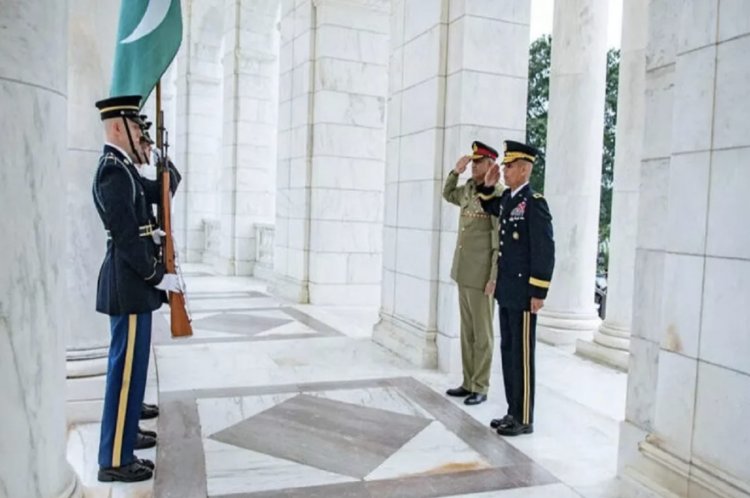 USA Plan B in South Asia: America has once again started strengthening its relationship with Pakistan. After giving multi-million dollar flood relief, and an F-16 fighter jet package to Pakistan, now America is going to openly welcome Pakistan Army Chief General Qamar, Javed Bajwa. This welcome of General Bajwa will be in the same way as the US Defense Minister Lloyd Austin had recently received the Indian Defense Minister Rajnath Singh. Analysts say that after India maintains a friendship with Russia, America is once again strengthening its 'Plan B' i.e. its relationship with New Delhi's enemy Pakistan.

America has been playing the game of strengthening ties with Pakistan in response to the friendship of India and Russia for decades. Despite all the claims of the Biden administration, America is now engaged in raising the enemy of India. America has not only opened its treasury for Pakistan but is also strengthening its army. According to Pakistani media, on the invitation of US Defense Minister Lloyd Austin, Pakistani Army Chief General Bajwa has reached America and will have a grand welcome at the Pentagon today.

US Defense Secretary Austin will welcome General Bajwa to the Pentagon in the same way that he had welcomed Indian Defense Minister Rajnath Singh in April and more recently India's Foreign Minister S Jaishankar. It is called Enhanced Honor Cordon. This type of reception is done in the US only by the US President, Vice President, General or Flag Officer of the US Army, foreign guests in the ranks of US officials, and at events organized to promote goodwill at the international level. During this, guests are welcomed on the stairs of the Pentagon.

This is the first time since the year 2019 that a Pakistani army chief has visited the US. This entire tour is being told for a week. General Bajwa has also met several other senior officials of the US administration. Analysts believe that after the turmoil of the early days of the Biden administration, the US is now busy re-strengthening ties with Pakistan. The US's major focus is defence and security relations. Analysts say that America is strengthening relations with Pakistan keeping India and China in mind.

Experts say that the US is not liking the growing friendship between India and Russia amid the Ukraine war. America has also openly threatened India. Despite US pressure, India is not voting against Russia in the United Nations. Not only this, India is constantly buying oil and weapons from Russia. After the Indo-Russian friendship remains intact, now the trickster America has come down to its old nature and is working on Plan B. America is now helping India's enemy Pakistan to keep its hand on New Delhi's sore throat.

America is modernizing the F-16 fighter jet of Pakistan which it used against India. Not only this, but America also wants that Pakistan should go completely into the camp of China. This is the reason why America, which has openly supported India till now, has started balancing relations with Pakistan. This move of America is a warning bell for India, especially when the friendship between the two was seen growing very much on forums like Quad against China.

Operation Chakra: Big action by CBI across the country regarding cyber fraud, ra...