Bus going from Giridih to Ranchi fell into river in Hazaribagh, 7 killed, 45 injured

Major Road Accident in Jharkhand: A major has come to the fore in the Hazaribagh district of Jharkhand. A horrific accident took place here on Saturday evening, in which seven people died while about 45 people are said to be injured. 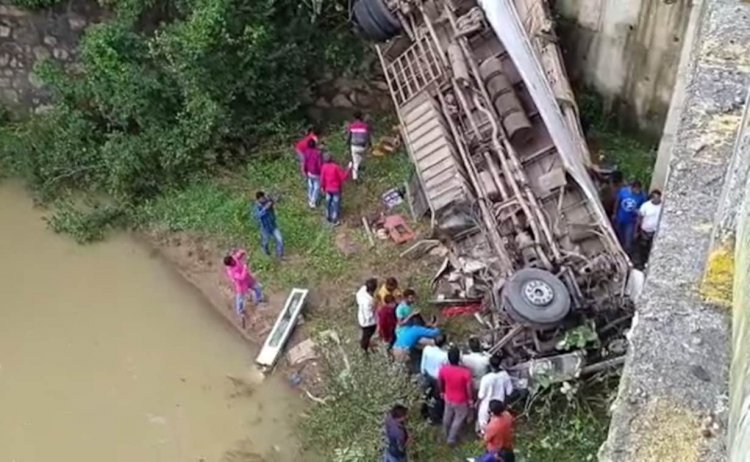 When death will come cannot be said. The latest example of this has come from Jharkhand. Where a bus full of people going to attend the kirtan went out of control and overturned in the river. Seven people died in this accident, while about 45 people were injured. As soon as the information about the accident was received, the local police reached the spot. Relief and rescue work has been started. Due to darkness, people are also facing difficulties in getting people out of the river.

According to the information received, this horrific accident happened in the Hazaribagh district of Jharkhand late on Saturday evening. Where a bus going from Giridih to Ranchi carrying 52 passengers went uncontrolled and overturned in the river. The victim of the accident had left Giridih in a bus named Shiva. The bus overturned in the Shivani river between Daru on Hazaribagh-Bagodar NH-100. Earlier, the news of the death of four people came to light due to this accident. But according to the information received after a while, the death toll in the accident has increased to 7.

Raju Singh of Hazaribagh Gurdwara Committee is also among those killed. 45 people injured in the accident have been admitted to Sheikh Bhikhari Medical College, Hazaribagh. As soon as the news was received, the police reached the spot and the injured were taken out of the bus after a lot of effort and sent to the hospital. According to the information, all the people were going to attend the Ranchi religious program Kirtan. Then this accident happened in the middle of the way.

On the information of the accident, relief work was started on the instructions of Deputy Commissioner Nancy Sahai. Efforts are on to rescue the injured trapped in the bus with gas cutters. It is being told that many people were trapped in the vehicle. They were taken out after hard work and admitted to Sheikh Bhikhari Medical College Hazaribagh by ambulance. As soon as the news of this accident was received, there was mourning among the people of the Sikh community. Children are also said to be among the dead.

An injured Vishwajeet Singh, who arrived for treatment at the Medical College, told that he had left Giridih at 1:30 to join Ranchi Sangat. After crossing Tatijharia, suddenly the car fell into the river. After which with the help of local people and police, we were evacuated and brought here.