Gehlot out of Congress President's race, sword hanging on the post of CM

Congress Presidential Poll: Rajasthan CM Ashok Gehlot has been out of the race for the post of Congress President. Sonia Gandhi is very angry with him. Now the discussion has started regarding new names. 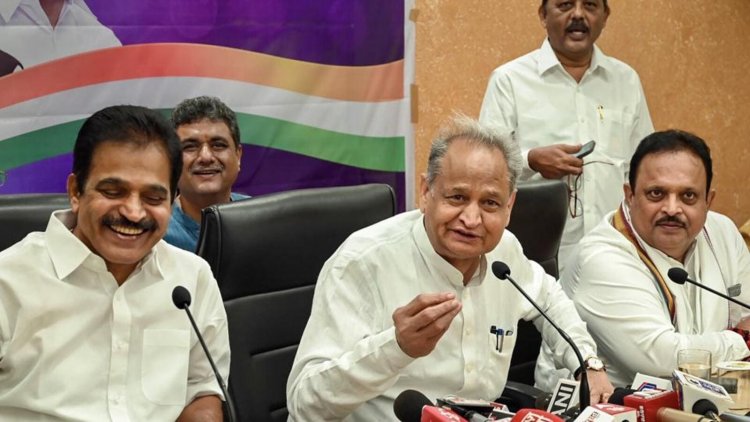 For Ashok Gehlot, the temptation for the post of CM has become overwhelming. According to Congress sources, he has been thrown out of the race for the post of president. The party says that if Ashok Gehlot had become the president and left the post of CM, Sachin Pilot would have easily taken over the power and the situation would have been controlled. However, this did not happen, MLAs loyal to Ashok Gehlot worsened the situation by making mass resignations. There was an earthquake in the politics of Rajasthan, whose heat was seen from Delhi to Kerala. This angered the top leadership of the Congress party. Even. The Congress Working Committee (CWC) has written a letter to Sonia Gandhi demanding that Ashok Gehlot should be thrown out of the race for the post of President. Now the news is that this demand has been accepted.

Actually, Sonia Gandhi is very angry with Ashok Gehlot. This displeasure is so great that Ashok Gehlot has now lost the president's post and it is being said that the sword is now hanging on his CM post too. It is being said that now a new name can be discussed for the post of CM in Rajasthan. At the same time, Gehlot has apologized to Kharge for the crisis caused by loyal MLAs and said that he has no role in all of this.

After Ashok Gehlot was out of the race for the post of president, now names like Malikarjun Kharge, Digvijay Singh, Mukul Wasnik, Kamal Nath and KC Venugopal are in the news. Even Shashi Tharoor is going to file nomination papers for the post of president on 30 September. If sources are to be believed, Sonia Gandhi and Rahul Gandhi are now churning about the new name, who should be made the president now. The option before the high command is to make someone trustworthy and loyal as the president, which has been filled with doubts due to the crisis caused by Ashok Gehlot.

Among them, the name of KC Venugopal, who is considered close to Rahul Gandhi, is being told in the forefront. KC Venugopal can play an important role in many important matters of the party for many years. By making him president, Congress will be busy strengthening its hold in South India.