MiG-21 crashes in Rajasthan, both pilots martyred, debris scattered for half a kilometer

MiG-21 crashes in Rajasthan, both pilots martyred, debris scattered for half a kilometer 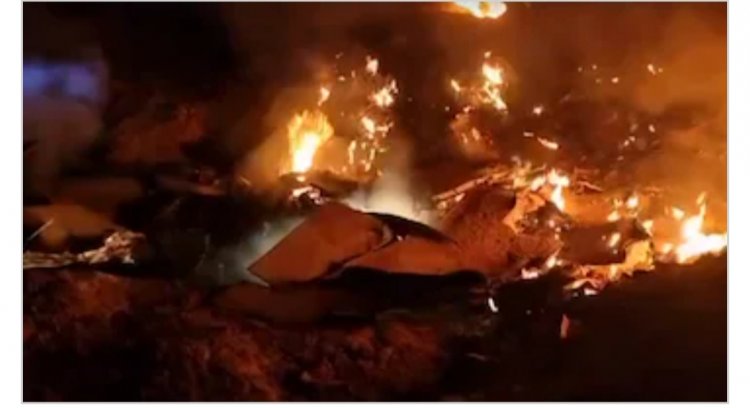 Barmer,Rajasthan : A major accident has occurred in Rajasthan.  A MiG-21 aircraft has crashed in Barmer.  Both the pilots in the MiG have been martyred.  The accident was so terrible that the debris of the MiG was scattered half a kilometer away.  The accident took place in Bhimda village of Baitu Police Station area of ​​Barmer.  The MiG-21 was flying around Bhimda village before the accident.  The cause of the crash is currently unknown.  Air Force has also given information about this by tweeting.  The IAF said the accident took place at 9:10 pm.  In which the MiG-21 trainer aircraft crashed.  It was said that the plane took off during training.  It is said that both the pilots have been martyred.  The Air Force has said that an inquiry has been ordered into the matter.  As soon as the information about the SP crash was received, Air Force officials including the District Collector rushed to the spot.  Defense Minister Rajnath Singh spoke to Indian Air Force chief Air Chief Marshal Vivek Ram Chaudhary about the tragedy.

At 9:10 pm this evening, an IAF MiG 21 trainer aircraft met with an accident in the western sector during a training sortie.
Both pilots sustained fatal injuries. — Indian Air Force (@IAF_MCC) July 28, 2022

IAF deeply regrets the loss of lives and stands firmly with the bereaved families.
A Court of Inquiry has been ordered to ascertain the cause of the accident — Indian Air Force (@IAF_MCC) July 28, 2022

The Air Chief briefed him in detail about the incident.  Defense Minister Rajnath Singh has also condoled the tragedy by tweeting.

Deeply anguished by the loss of two Air Warriors due to an accident of IAF’s Mig-21 trainer aircraft near Barmer in Rajasthan. Their service to the nation will never be forgotten. My thoughts are with the bereaved families in this hour of sadness. https://t.co/avKi9YoMdo — Rajnath Singh (@rajnathsingh) July 28, 2022

Some videos are also coming out after the MiG-21 crash.  Fire and MiG wreckage are visible everywhere.  Many people have also gathered around the debris.  There have been cases of MiG-21 crashes in the past.  A MiG-21 also crashed during training at Barmer last year.  Earlier on 21 May 2021, a MiG-21 aircraft crashed in Moga, Punjab.  In which pilot Abhinav was martyred.

India Needs To Have A Specific Law To Prevent Child Trafficking: Kailash Satyart...

India Will Set Up A Joint Theater Command Of The Three ...