The Mahagathbandhan government of Bihar won the trust vote with a huge majority in the assembly today. After presenting the motion of trust vote, Nitish Kumar and Tejashwi Yadav attacked the BJP fiercely in the house. 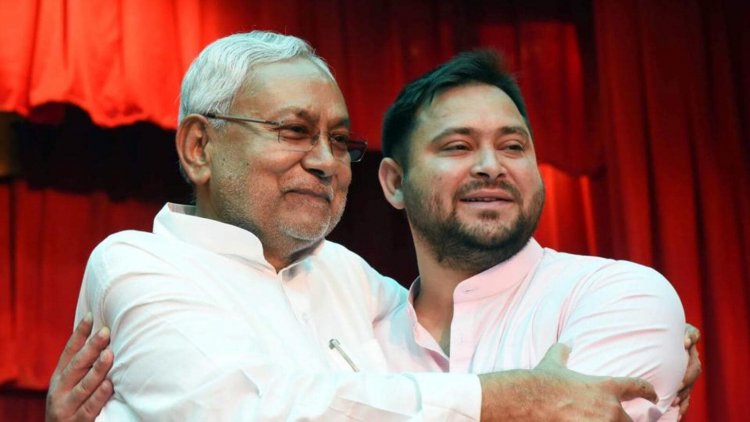 Nitish Kumar-Tejashwi Yadav's Mahagathbandhan government in Bihar today won the trust vote with an overwhelming majority. After presenting the motion of trust vote, many other leaders of the ruling party, including Nitish Kumar and Tejashwi Yadav, attacked the BJP and the Center fiercely.

To which BJP MLAs also responded. During this period allegations and counter-allegations also took place between the ruling party and the opposition legislators. In the end, despite having a majority, the ruling party demanded to vote. Which was opposed by BJP MLAs saying that when the motion of confidence has been passed by voice vote, then what is the need for voting? But even after this, the voting took place. Seeing this, BJP MLAs boycotted the voting and walked out of the house.

Before the floor test, BJP leader and assembly speaker Vijay Kumar Sinha resigned from his post. He was adamant about not resigning till Tuesday. Which was opposed by JDU. After the Speaker's resignation, the Deputy Speaker got the floor test conducted. After the floor test, it was also informed that on August 26, the next speaker of the Bihar Legislative Assembly will be elected.

During the floor test, Nitish attacked the BJP and said that it makes Hindus-Muslims for their own benefit. After breaking the alliance with BJP, all the opposition parties had called him and said that he did it right. Nitish said that we told the opposition leaders that in 2024 we will fight the elections together.

Deputy CM Tejashwi Yadav was also seen attacking the center during the floor test. Tejashwi Yadav said on the raids in the mall of Gurugram, including the CBI raid on the house of many RJD leaders in Bihar today, that the mall in Gurugram on which the CBI raided is not mine. It was inaugurated by BJP MP.

Tejashwi further said that wherever BJP is not in power, it takes forward its three Jamai. This includes ED, CBI and IT (Income Tax Department). When I go abroad, the BJP issues lookout notices against me. At the same time, when people like Nirav Modi run away, they do nothing.

On the alliance of JDU and RJD, Tejashwi said that we are cricketers and that this pair (RJD-JDU) will make a never-ending partnership. This inning is going to be long. The Deputy CM said that together they will work for the development of Bihar and the country.

On the other hand, during the floor test, BJP's former Deputy Chief Minister Tarkishore Prasad attacked Nitish Kumar, saying that he strangled the mandate. This led Bihar towards Jungle Raj. Nitish Kumar never formed the government in Bihar on his own but has ambitions of becoming the Prime Minister at the Centre.

Tarkishore Prasad further said that there is no such relationship which Nitish Kumar has not cheated. He said that it was Lalu who had said this. Did he raise questions that from where will the new government give jobs? He said that Nitish Kumar is such a batsman who keeps playing himself and gets others run out.