Arshdeep Singh's Wikipedia Page Vandalised: During the India-Pakistan match on Sunday, Arshdeep dropped the catch of Asif Ali in the 18th over. Since then, he has been a target of users on social media. Taking advantage of this, Pakistan hatched a conspiracy by editing Arshdeep's Wikipedia page. 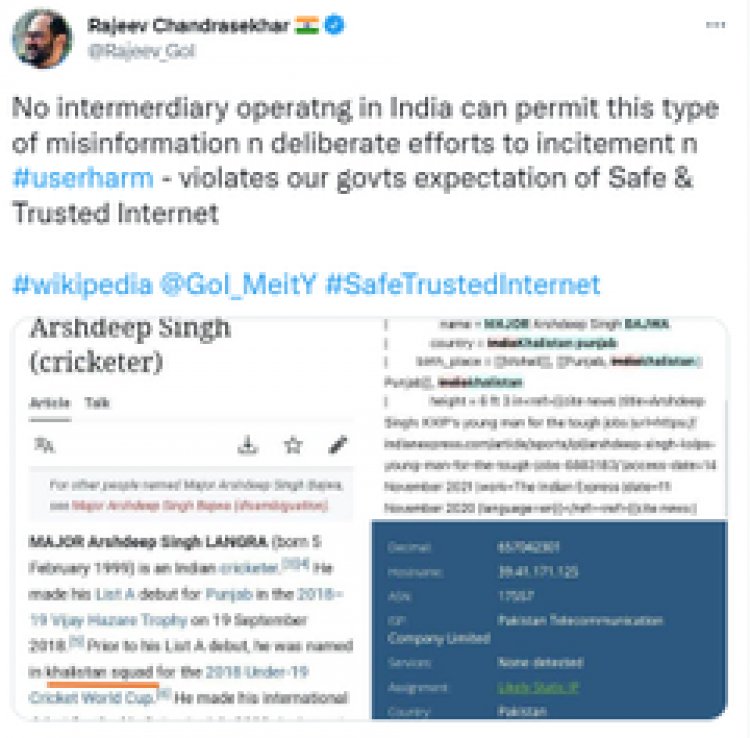 India and Pakistan were face-to-face in the Asia Cup Super-4 round match on Sunday. This match was very interesting but India lost it. After this defeat, left-arm fast bowler Arshdeep Singh came under the target of people on social media. Now the Pakistani conspiracy against him has been busted. Pakistan hatched a lousy conspiracy by tampering with Arshdeep's Wikipedia page to call him Khalistani. By doing this he was conspiring to instigate the Sikhs of Punjab against India. Even Khalistani tweets were made from a Pakistani Twitter handle. Now in this matter, the Central Government has summoned the officials of Wikipedia and has sought answers.

The Ministry of Electronics and IT today summoned Wikipedia officials to explain and ask how the page of cricketer Arshdeep Singh was published with fake information linking him to the separatist Khalistani movement.

A government official said, "This issue is very serious and can have dire consequences. We are not taking it lightly. We will ask Wikipedia officials how such editing can be allowed to last for some time." "

Images of tampered with Wikipedia page are going viral on social media. Arshdeep Singh On the edited page of Wikipedia, an unknown user had written the word Khalistani instead of 'India'.

Actually, Arshdeep had dropped the catch of Asif Ali in the 18th over and was being told the turning point for this India's defeat. Since then, he was targeted users on social media. In such a situation, Pakistan started running Khalistani propaganda under its nefarious conspiracy.

Modi government will change the name of Rajpath, 'Duty Path' will be the new nam...

Australian player alone will be heavy on India, the leg...