These two Bollywood actresses Taapsee Pannu is in the news for her film 'Dobaara'. The actress is busy promoting the film with a lot of noise, but in the meantime, something happened that the actress's anger broke out on the paparazzi and whose video went viral on social media. 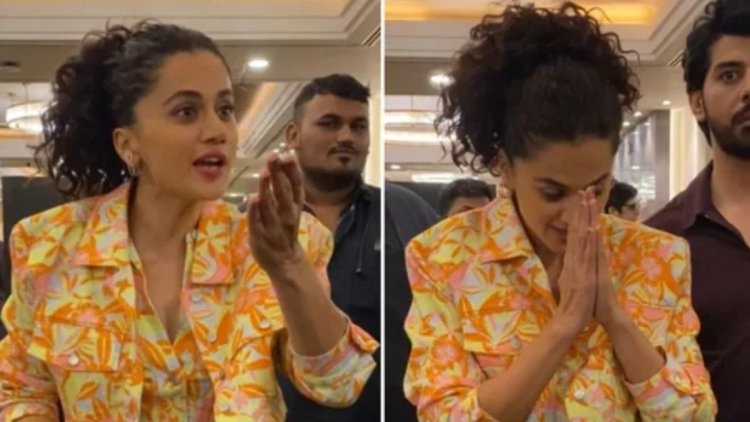 Recently, a video is going viral on social media, in which Taapsee is raging at Pannu's paparazzi. Taapsee attended the promotion event of her film Dobara at Mithibai College in Mumbai on Monday evening. Photographers started walking in front of them to take their pictures. He keeps asking Taapsee to stop but Taapsee does not stop. Paparazzi said that he has been waiting for her for the last 2 hours and she is very late. Papps asked Taapsee to stop for a while and take pictures as he was waiting for her for a long time.
Going ahead, the actress stops at one place and says 'Why are you scolding me? What is my mistake in this? You talk to me politely.' On this, the photographer says 'We have talked to you politely. We have been standing by you since 4:30. After listening to the photographer, Taapsee says, "Talk to me in a way you can. I am doing my work, I have come at the time I was called. You talk to me kindly. Right now the camera is only on my side, so only my point is visible. If the camera was on your side then you would have known how you are talking to me.
Upset, Taapsee joined hands with the paparazzi and said that you people are always right, and actors are wrong. At the same time, recently, during an interview with Taapsee, a question was asked about 'Koffee with Karan 7', to which she answered with impunity. He was asked what is the reason why he was not invited to 'Koffee with Karan'? To this, the actress gave such an answer that everyone was stunned. On not being invited to 'Koffee With Karan 7', Taapsee said that her sex life is not very interesting.
Taapsee Pannu is counted among the top actresses of Bollywood. She is climbing the new ladder of success with her strong acting. Now soon she is going to be seen in the film 'Dobaara'. The film is going to release on August 19.

India is going to impose a ban on the sale of Chinese mobiles worth less than 12...

Mother Vanita said on the allegation of not giving mone...