PM Modi in Kargil on the occasion of Deepawali, meeting soldiers, said- 'Diwali'

On the occasion of Diwali, Prime Minister Modi reached Kargil, where he met the soldiers. After this, addressing Kargil, PM Modi said that Diwali means a celebration of the end of terror. During this, he also mentioned the war with Pakistan. 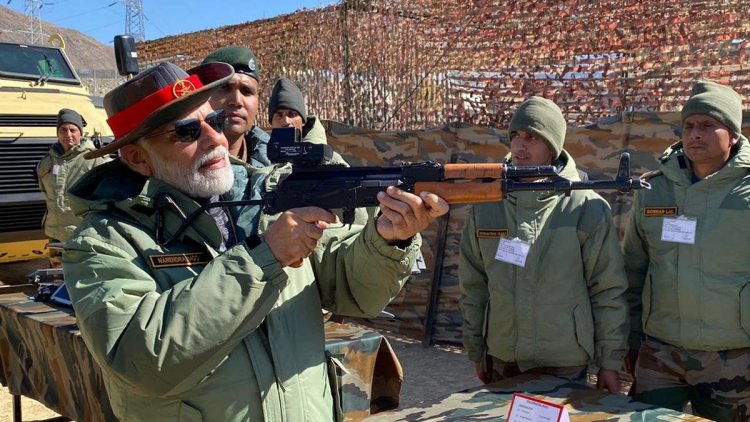 Diwali is being celebrated with pomp across the country today. Meanwhile, Prime Minister Modi has reached Kargil to celebrate Diwali with the soldiers. This is the 9th consecutive Diwali after becoming the Prime Minister, which PM Modi is celebrating with the soldiers. Every year PM Modi celebrated Diwali with soldiers by visiting different borders of the country. After this, he is celebrating Diwali with the soldiers in Kargil, from where he addressed the soldiers and said that "For years, my family is all of you. The sweetness of my Diwali increases by coming among you, my Deepawali. The light of the day is with you. I am fortunate to have got the opportunity to celebrate Diwali with you over the years by coming to your midst at the border."

Along with this, Prime Minister Modi told the soldiers that "If you are standing as a shield on the border, then the strictest action is being taken against the enemies of the country inside the country. A successful attempt is being made to uproot it."

PM Modi said that there has not been a single fight with Pakistan where Kargil has not hoisted the flag of victory. The meaning of Diwali, he said, is the celebration of the end of terror. Kargil did the same thing. Our army had crushed the hood of terror in Kargil, on the occasion of such Diwali money of victory in the country that people still remember him. Along with this, Prime Minister Modi said that because of you, the countrymen live peacefully in the country, it is a matter of happiness for the people of India.

The Prime Minister said that we never considered war as the first option. We have always considered war as the last option. We have tried to postpone the war till the end. We are against war but without strength, there is no peace. If someone looks at us and looks at us, then our three armies know how to give a befitting reply to the enemies in their own language. Along with this, he said that a country is immortal when its children, its brave sons and daughters have absolute faith in their own strength. PM Modi further said that I admire our three armies who have decided that more than 400 defence items will no longer be bought from abroad but will be made in India itself.

Prime Minister Narendra Modi said that during the Ukraine war we saw how our national flag became a shield for our citizens trapped there. India's respect has increased across the world. This is happening because India is successfully taking the front against its internal and external enemies.

WhatsApp service restored, WhatsApp was not working due to server down for about...

After 14 hours of raid in the house, now CBI will inves...

After JNU, controversy over BBC documentary in Jamia, 4...