During his Gujarat visit, Prime Minister Narendra Modi attended the Khadi Festival organized in Ahmedabad. During this, he was seen spinning a spinning wheel like Mahatma Gandhi. On the first day of his visit, PM Modi also inaugurated the foot-over bridge built by the Municipal Corporation. 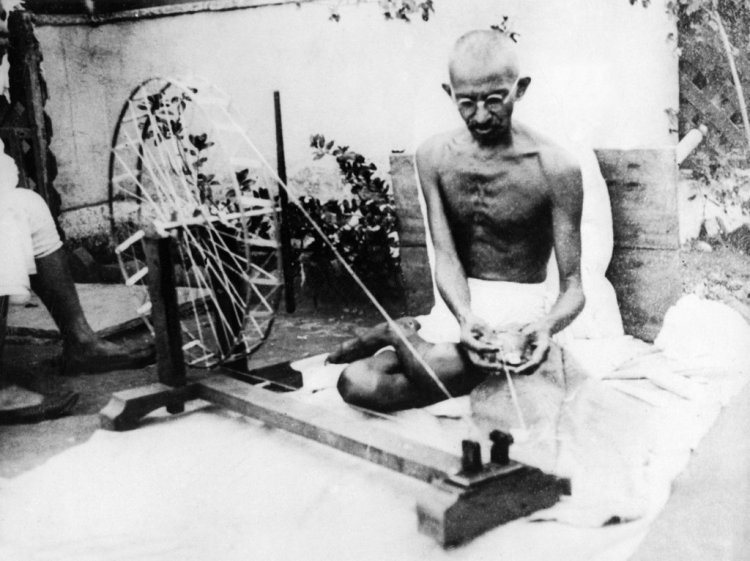 Prime Minister Narendra Modi has reached Gujarat on his two-day visit from today i.e. 27th August. PM Modi will lay the foundation stone and inaugurate several important schemes in Gujarat today. During this, he participated in the 'Khadi Utsav' organized on the Sabarmati Riverfront in Ahmedabad, the capital of Gujarat. He also cut the yarn by running a spinning wheel with women artisans here. PM Modi, who participated in the Khadi festival, said during his address that this bank of Sabarmati has become blessed today. To commemorate 75 years of independence, 7500 sisters and daughters have created a new history by spinning yarn on a spinning wheel together.

PM Modi said, "I am sure that all the people present here, watching this event will be feeling the energy of 'Khadi Utsav' here today. In the Amrit Mahotsav of Independence, the country has celebrated its 'Khadi Utsav' today. A very beautiful gift given to freedom fighters."

The Prime Minister said, “A few days ago, the whole country including Gujarat celebrated the Amrit Mahotsav with great enthusiasm on the completion of 75 years of independence. Just like in Gujarat, every village, every village, every household with enthusiasm, zeal and enthusiasm about the tricolour. We have all seen his pictures of mind bhi tricolour, body bhi tricolour, and emotion too tricolour all around. He said, "Khadi, which Gandhiji made the country's self-respect during the freedom movement, was filled with inferiority complex after independence. Because of this, Khadi and the village industry associated with Khadi were completely destroyed. This situation was very painful, especially for Gujarat."

Linking Khadi with India's independence, the PM said, "History is witness that a thread of Khadi became the strength of the freedom movement, it broke the chains of slavery. The same thread of Khadi is the self-reliant force to fulfill the promise of a developed India." Can become a source of inspiration to fulfill India's dream." He said, "Countries that forget their history, they are not able to create a new history. Khadi is an integral part of our history and heritage. When we take pride in our heritage, then the world also respects and respects it. "

Regarding women, the PM said, "Women's power is also a major contributor to the growing strength of India's Khadi industry. The spirit of entrepreneurship is ingrained in our sisters and daughters. The proof of this is also the expansion of Sakhi Mandals in Gujarat. This bank of Sabarmati has become blessed today. On the occasion of 75 years of independence, 7,500 sisters and daughters have created a new history by spinning yarn together on a spinning wheel. meet."

PM Modi said, "We added the resolve of Khadi for Transformation to Khadi for Nation, Khadi for Fashion. We started spreading the experiences of Gujarat's success across the country. The problems which were related to Khadi across the country were resolved. We encouraged the countrymen to buy Khadi products. Today India's top fashion brands are coming forward to associate themselves with Khadi. Today India is witnessing record production and record sales of Khadi. Sales of Khadi in last 8 years There has been an increase of more than 4 times in India. Today, for the first time, the turnover of India's Khadi and Village Industries has crossed Rs 1 lakh crore." He said, "Khadi is an example of sustainable clothing. Khadi is an example of eco-friendly clothing. Khadi minimizes the carbon footprint. There are many countries where the temperature remains high, Khadi is also very important from the point of view of health. So Khadi can play a huge role at the global level."

Let us tell you, on the first day of his visit, PM Modi inaugurated the foot-over bridge built by the Municipal Corporation. The bridge is named after former Prime Minister Atal Bihari Vajpayee. Apart from pedestrians, cyclists can also use this bridge to cross the river. Prime Minister Modi also shared four pictures before the inauguration of this bridge. The photos shared by the PM were from the night time and the bridge looked very beautiful lit up with lights. At the same time, it is being told that on Sunday, PM Modi will also unveil the Veer Balak Memorial in Anjar town of Kutch.

PM Modi said - Student power is the foundation of a pow...

Entry will not be available in India without RT-PCR tes...