French President Emmanuel Macron has lauded Prime Minister Narendra Modi at the United Nations General Assembly (UNGA) session and told world leaders that he was right when he told Russian President Vladimir Putin that this era is not of war. 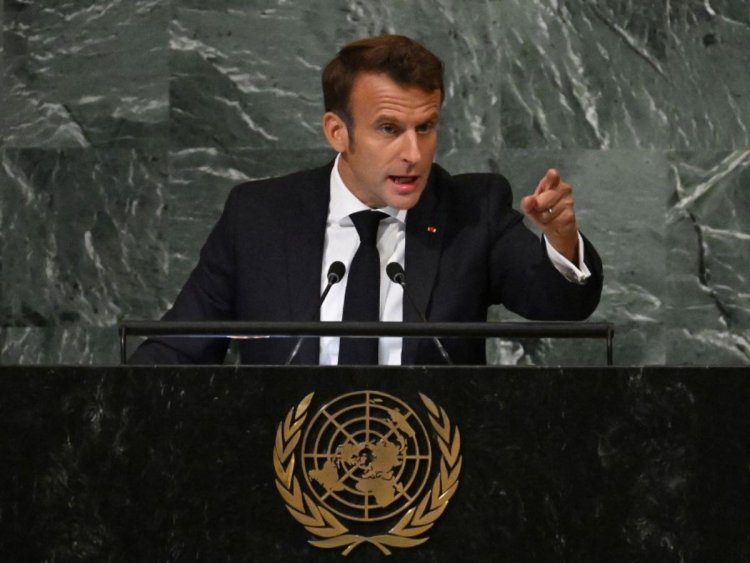 At the recently concluded Shanghai Cooperation Organization summit, Indian Prime Minister Narendra Modi taught Russian President Vladimir Putin a lesson in peace during bilateral talks. PM Modi is now being praised all over the world for this initiative taken during the war between Ukraine and Russia. French President Emmanuel Macron has praised Prime Minister Narendra Modi by naming him in the 77th session of the United Nations General Assembly. Macron said that PM Modi has rightly said that today is not the time for war. Let us tell you that earlier America had also supported PM Modi's statement and the media there had praised it fiercely once again the White House issued a formal statement and praised PM Modi's statement.

During a conversation with Russian President Vladimir Putin, PM Modi said, "Today is not an era of war. I talked to you about it on a phone call as well. Today we should talk about how we can make peace." India and Russia have been with each other for many decades.

Macron did not stop here. Macon went on to say that "that is why today there is an urgent need to develop a new contract between the North and the South, an effective contract that takes respectful initiatives for food, for biodiversity, for education. Our time is chaotic." but to form a common front comprising legitimate claims and common interests.

Prime Minister Modi said this during a bilateral meeting on the sidelines of the Shanghai Cooperation Organization summit in Samarkand, Uzbekistan. He said, "We have spoken many times over the phone about India-Russia bilateral relations and various issues. We should find ways to solve the problems of food, fuel security and fertilizers. I would like to help our students in evacuation from Ukraine. I want to thank Russia and Ukraine for their help."

Responding to PM Modi, Russian President Vladimir Putin said that he is aware of India's position on the Ukraine conflict, but Ukraine is not ready to talk. At the same time, he also said that we want all this to end as soon as possible.

At the same time, praising PM Modi's statement, White also issued a statement on Tuesday, 21 September, saying that Prime Minister Narendra Modi's message to Russian President Vladimir Putin during their meeting on the sidelines of the SCO summit in Uzbekistan "is of principle". a statement" which he believes is "correct and just" and is "very well received" by the United States.

Before this, US Secretary of State Antony Blinken also praised Prime Minister Narendra Modi for this statement. He had said that "what we are hearing from India reflects the concerns of the world. I think the message given by the leaders of India and China in Uzbekistan is a clear indication that Russian President Vladimir Putin Whatever they are doing, they are isolated because of it.

Another U-turn from Elon Musk: Twitter will buy only on...