Once again singers Aamir Shaikh and Sadhana Verma have come together with a beautiful new song called “Mansuba”. They have sung many songs together in their musical journey. The song has been released on B4U Music Company’s platform which is getting a tremendous love and recognition from the audiences. “Mansuba” is a peppy dance number. […] 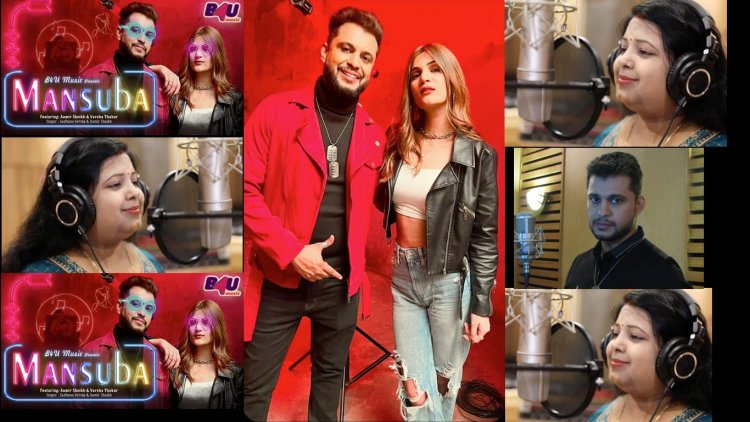 Once again singers Aamir Shaikh and Sadhana Verma have come together with a beautiful new song called “Mansuba”. They have sung many songs together in their musical journey. The song has been released on B4U Music Company’s platform which is getting a tremendous love and recognition from the audiences.

“Mansuba” is a peppy dance number.  Singer Sadhana Verma has sung it very beautifully and Aamir Shaikh’s rap  to make this song even more exciting. The song was very challenging for singer Sadhana Verma as earlier she only sang romantic and sad songs. After singing “Mansuba”, she has proven that she is a versatile singer and can sing any kind of song very easily.

“Mansuba” song is beautifully composed by Zakir Sadani. The song is written by Arif Dehelvi and Aamir Shaikh. Director and Cinematographer of the song is Kiran Kumar Mishra. Choreographed by Shubhendu Dwivedi ji. Performed by sizzling Varsha Thakur and dashing Aamir Shaikh.

Sadhana Verma said “Mansuba” was a very different song for her. She has sung many songs in the past with different genres which liked by the audience. Two songs “Yaara” and “Apni Kahani” were released previously by T-Series Music company. Javed Ali, Famed singer of song “Srivalli” from film ‘Pushpa and Sadhna Verma had sung a sad  romantic song “Yaara”. “Apni Kahani” is a sad rock romantic song which was sung by Sadhna Varma along with Bollywood playback singer which was well portrayed by Shahid Mallya and Aamir Shaikh. Both these songs were loved by the millions of audiences and listeners and their songs were also praised by the big celebrities of the Bollywood industry.

The song “Mansuba” released by B4u Music is very beautifully shot. In this song, irresistible model Varsha Thakur has gained her admiration, amazing performance, hot style and her intoxicating eyes attracts the attention of the audience.

It is a big challenge for a singer to perform in a video but Aamir Shaikh has shown his best and unique performances in the videos. Aamir Shaikh is a singer, rapper, actor and a well-known sound engineer of Bollywood. His songs are released by top most music companies like T-Series, Zee Music, Venus, Worldwide Records, B4u Music, A1 Music, Qb Music etc. Apart from this, multi-talented Aamir has also worked as a sound engineer with all the famous singers and music directors of Bollywood. He has also done recording and mixing mastering of songs for films like Bodygaurd, Namastey London, Red, Apne, Shaka Laka Boom Boom, Nanhe Jaisalmer, Aapka Suroor….ect…

Meet Hemant Singh, a well-known actor from the Haryanvi Industry, His single tho...

Happy Birthday to Mr. Vishal Dodiya, The Ruler of Gujar...

Dhoop Chhaon got a lot of Appreciation at the Special S...