Bihar: Congress convenes a meeting of MLAs, may agree to go with Nitish Kumar!

Bihar politics are soon showing signs of upheaval like Maharashtra. This is the reason why political parties have also started the round of meetings. Although Tuesday can prove to be important for Bihar's politics, its glimpse has started showing from Monday itself. 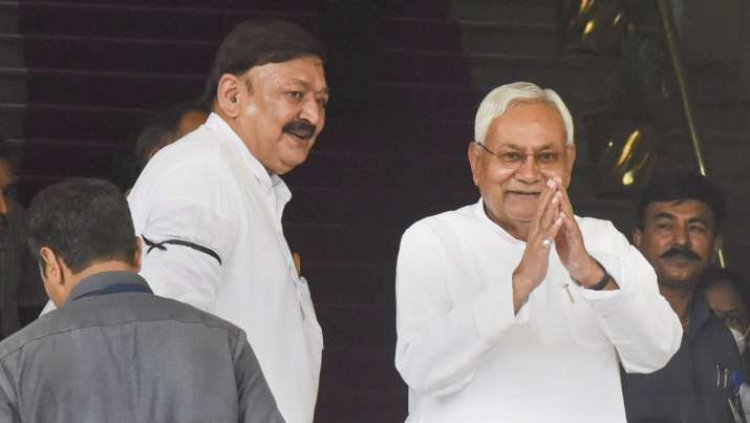 The clouds of crisis have started hovering over the politics of Bihar. Everyone saw the developments of how the Maharashtra Vikas Aghadi government fell recently in Maharashtra. At the same time, there are signs of political upheaval in Bihar too. Other political parties are also eyeing the tussle that started between JDU-BJP. Especially the Congress has started increasing its steps in the midst of this tussle. Congress is also keeping a close watch on the political situation in the state. Although Tuesday is an important day in the politics of Bihar, its glimpse has started showing from Monday itself.
Congress has called a meeting of its legislature party. It is believed that in this meeting, Congress will try to know the opinion of its MLAs. There is a discussion in political circles that if CM Nitish Kumar decides to break ties with BJP, then Congress can increase its closeness with him.
In the meeting of the Congress Legislature Party, there will also be a discussion on what the party should take with Nitish Kumar. However, there is talk that Nitish may be welcomed in the opposition camp if he breaks ties with the BJP.
According to All India Congress Committee (AICC) secretary and MLA Shakeel Ahmed Khan, the meeting will be held at the residence of party leader in the legislature Ajit Sharma and party in-charge of Bihar Bhakta Charan Das is also likely to attend.
According to Shakeel Ahmed Khan, Congress has always believed that like-minded people should work together. If JDU, which beliefs in socialist ideology, leaves the side of the BJP, then we will definitely welcome it. This will be the main discussion in the meeting.
However, Shakeel Ahmed Khan did not say anything on behalf of CM Nitish Kumar regarding the phone conversation with Sonia Gandhi. He said that last night there was a phone talk between these days or not, I cannot do anything about it. On such matters, the top leader or spokesperson of the party can comment.
When Shakeel Ahmed was asked the question that in view of the current political situation, with whom will the Congress JDU chief Nitish Kumar or RJD leader Tejashwi Yadav be with him? In response, Shakeel said that this decision will be taken with the consent of the party leaders when the time comes.
The Congress leader said that, before all these things, it is most important that Nitish Kumar announces the break of his ties with the BJP. When Nitish Kumar makes this announcement, after that there is a possibility of such questions.
Political parties have started a round of meetings amid signs of the political crisis in Bihar. While Congress called a meeting on Monday, JDU has also called a meeting at the Chief Minister's residence at 11 am on Tuesday.
Apart from this, it is being told that Rashtriya Janata Dal has also called a meeting of its MPs and MLAs on August 9 at Rabri Devi's residence in Patna. In fact, RJD has instructed its MLAs to stay in Patna till Wednesday.

BJP-JDU alliance on the verge of collapse in Bihar! JDU's decisive meeting today...

Shashi Tharoor to contest the election of Congress Pres...

Court granted bail to all three Congress MLAs of Jharkh...