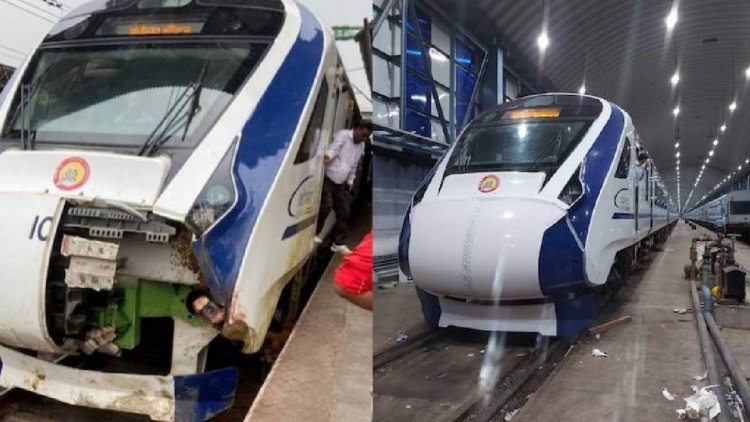 On Friday, the Gandhinagar-Mumbai Vande Bharat Express train collided with a cow near Anand station. The nose panel of the engine of the train got damaged in this accident. Railway officials have given the above information. The accident happened at around 3.48 pm on Friday. No major damage was caused to the train in the accident. Nevertheless, the nose panel of the train engine was fixed by taking it to the yard.

Earlier on Thursday, the Gandhinagar-Mumbai Vande Bharat Express train collided with a herd of buffaloes near Vatva and Maninagar stations near Ahmedabad railway station. Four buffaloes were killed in this accident. Also, the front part of the engine was badly damaged. After this accident, an FIR has been lodged against the buffalo owner. RPF Inspector Pradeep Sharma posted at Vatva railway station said that a case has been registered against the buffalo owner under section 147 of the Railways Act 1989.

On the other hand, the statement of Railway Minister Ashwini Vaishnav has also come to the fore on the accident. The minister said the track is on the ground in most parts of India. Because of this, cases of animal collisions keep coming. The train has been designed in the same way to deal with this. Whatever accident happened yesterday, has also been cured while reaching Mumbai. The train is strong, its design is global. The front part is made in such a way that if there is any breakage, it can be repaired immediately.

PM MODI’S PICTURE SURFACED AS HE VOTES FOR PRESIDENTIAL...