'If you die, remember Sushant Singh first and now with me..' The memory of this actor is missing

Recently, the tweet of a Bollywood actor is becoming increasingly viral. In his tweets, the actor has made a big disclosure related to himself. He has told that his memory is going away. Along with this, he has also mentioned the death of Sushant Singh Rajput. 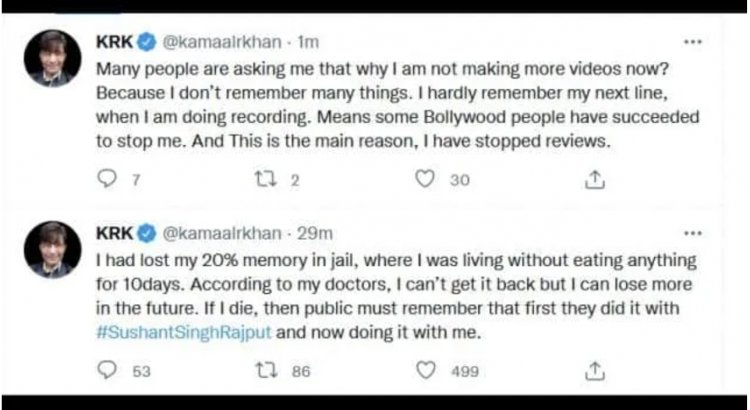 Back in the day, Kamal R Khani ie KRK, who is in the legal backlog for his controversial tweets about Bollywood stars and who describes himself as a film critic, remains in the headlines for his tweets even after coming out of jail. Recently, he made some tweets about the recently released Hrithik Roshan's film 'Vikram Vedha' and Varun Dhawan's upcoming film 'Bhediya', in which he called both these films a flop. At the same time, KR has made some more tweets recently, in which he has made a big disclosure related to his health and mental condition.

Not only this, but the actor has also mentioned the death of late actor Sushant Singh Rajput. Recently, KRK has told through his tweet that his memory is going. KRK has made many tweets, out of which he writes in the first tweet that 'I have lost up to 20 percent of my memory in jail'.

He further wrote that 'where I lived without eating anything for about 10 days. According to my doctors, my memory cannot come back though it may go more in the coming time. If I die then people have to remember that earlier they did this to Sushant Singh Rajput and now they are doing it to me.

In his second tweet, KRK writes 'A lot of people are asking me why I don't make more videos? I can't remember a lot of things, I can hardly remember my next line when I'm recording. This means that some Bollywood people have succeeded in stopping me. And that is the main reason why I have closed the reviews.

His tweet is becoming increasingly viral, on which mixed reactions from users are coming. While some users and their fans are worrying for them, some users are also trolling them for this. Trolls say that KRK is doing all this just to be in news. At the same time, some trollers are getting angry with him for using Sushant's name to get the limelight.

Akshay Kumar's 'Cuttputlli' proved to be a hope for Bollywood,...

There Is A Special Bonding Between These Half-siblings...

After Urvashi Rautela, Another Indian Actress Fell For...