Shinde government decision: Sports status given to Dahi Handi; Govindas will get jobs

Dahi Handi festival is celebrated on the next day of Shri Krishna Janmashtami. Dahi Handi festival is celebrated with great pomp in Maharashtra and Gujarat. Maharashtra Chief Minister Eknath Shinde has taken a big decision regarding Dahi Handi. In case of death during Dahi Handi, the assistance of Rs 10 lakh will be given to the family of concerned Govinda and Rs 7.50 lakh and Rs 5 lakh will be given in case of disability. 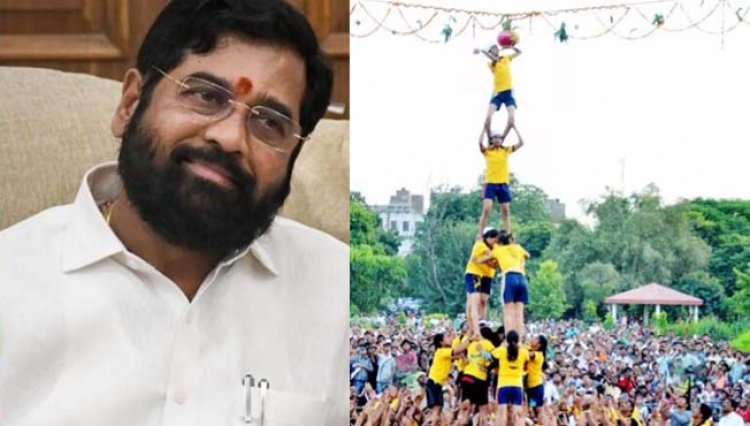 The festival of Shri Krishna Janmashtami is celebrated with great pomp in the country. Along with this, the program of Dahi Handi will be celebrated on the second day of Janmashtami i.e. on August 19 this year. Dahi Handi festival mainly takes place in Maharashtra, Goa and Gujarat. Dahi Handi festival is also known as Gopalkala in Maharashtra. Meanwhile, the Chief Minister of the state Eknath Shinde has made a big announcement. The Shinde government has given Dahi Handi the status of a game like Kabaddi and Kho-Kho.
Now Dahi Handi has been recognized as an adventure sport in the state. Govinda who joins Dahi Handi will be able to enjoy government schemes. Govinda will also get government jobs for the sports quota from now on. CM Eknath Shinde has announced in the assembly on Thursday. CM Shinde announced that soon Dahi Handi competition will also start in the state based on the rules of Pro Kabaddi.
Dahi Handi has been declared a public holiday. Govindas participating in Dahi Handi will not only get government jobs from now on but they will also be given insurance protection. The state government has decided that if an accident happens while playing Dahi Handi and in such a situation, Govinda dies, then the family members of the concerned Govinda will be given a compensation of Rs 10 lakh. In case of serious injury, an amount of Rs 7 lakh 50 thousand will be given as help.
If a Govinda loses both legs or both hands or both eyes or any two important parts of the body during Dahi Handi, then the state government will give him an amount of Rs 7.5 lakh. In such an accident, if a Govind loses an arm or a leg or any part of the body, then in such a situation, an amount of 5 lakh rupees will be given to him as help.

Veerangana gave last farewell to the martyr by giving a salute on the moustache,...

Congress took a jibe at the Finance Minister's statemen...

Mallikarjun Kharge was crowned in the presence of Sonia...