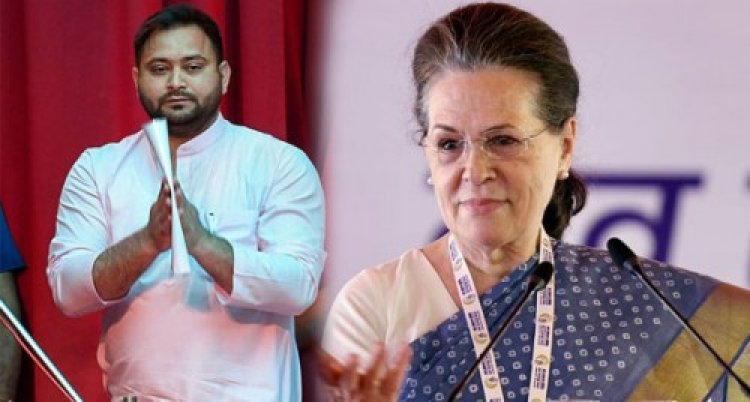 After meeting Sonia Gandhi, Tejashwi targeted the BJP and said that there was a conspiracy to eliminate the regional parties, but the people of Bihar are not for sale, they are durable. He said that under the leadership of Nitish Ji, a new government of Mahagathbandhan has been formed in Bihar. This government will run strong. This is the government of the people. Nitish Kumar Ji has taken the right decision. The decision taken by Nitish Kumar has worked to slap the BJP at the right time. In the Bihar assembly, all parties except BJP have become one. People are troubled by inflation, unemployment and social tension. Efforts were being made to spoil Ganga-Jamuna Tahteeb.

Deputy CM Tejashwi Yadav said on Friday that BJP means 'bad liar party'. The Deputy CM said that BJP people only enjoy doing ludicrous things. He also said that if BJP has an attachment with Bihar. So why it has not been given special status till now? Employment is being discussed everywhere, but this party has nothing to do with it. Tejashwi Yadav further said that BJP talked about giving 19 lakh jobs in the state, did they also give 19 jobs?

Tejashwi Yadav also alleged that an edited video was played, and we replied to it. Giriraj Singh should dare to ask PM Modi about the jobs and the special package he had promised to the state. BJP is a party of liars, they sit in front of the media, what work do they do?

After meeting the top leaders of the opposition including Congress interim president Sonia Gandhi in Delhi, Tejashwi Yadav said that we have met the top leadership of the opposition parties. Also, thank all the leaders for their cooperation in forming the government. Tejashwi said that the government of the Grand Alliance is the real government. He said, "Whether it is about inflation or fighting a Hindu-Muslim war, Bihar has taught a lesson to BJP about all these issues. I thank CM Nitish Kumar and Sonia Gandhi. I also thank Lalu Ji. I give that he fought against communal forces throughout his life."

Rishabh furious at Urvashi for 'Quit me sister'; The actress said - 'I am Munni....

'Go First' flight to Maldives made emergency landing in Coimbatore due to 'smoke...

Jaishankar rained terror on China and Pakistan in UNSC,...

Little hope of relief in the prices of petrol and diese...