Two world records were set by the Federation of Indian Associations (FIA) on the 'India Day Parade' on the occasion of the Amrit Festival of Independence in New York City. This record has been made by American Indians together. On this occasion, like Republic Day, tableaux filled with Indian culture were also taken out. 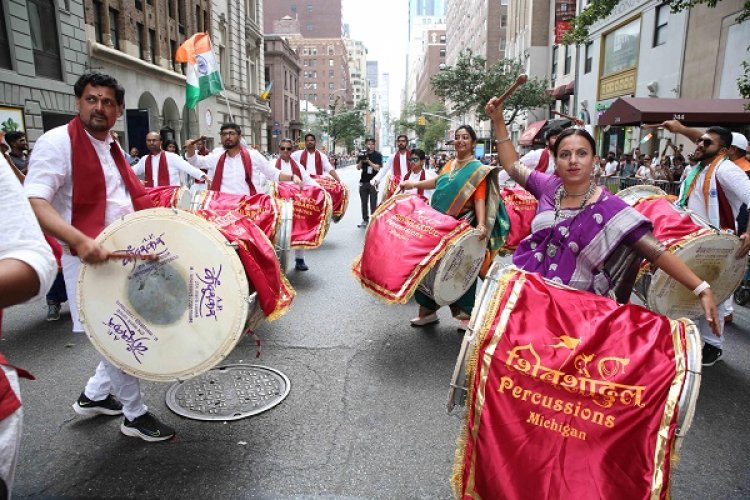 The Federation of Indian Associations (FIA) created two Guinness World Records simultaneously on a single day at Madison Square as part of the Amrit Mahotsav event in New York City, USA. On the one hand, on the one hand, in the celebration of the seventy-fifth anniversary of independence in the country, all the sects of the entire country had painted the whole country in the colour of tricolour with tricolour tours and had awakened the spirit of patriotism, in this episode, we lived in America. The people of the Indian community also left no stone unturned in patriotism.

The history that American Indians have created by setting these two world records at the same time is a matter of pride for all Indians. Talk about these two world records, that was the highest number of flag hoisting and the second was the use of Damru in large numbers in the 'India Day Parade'. It is being told that on August 21, on the occasion of 'India Day Parade', two world records were set in the Guinness Book of Records for the highest number of flag marches and the maximum number of drums played in a single rhythm in the presence of lakhs of Indians.

In the presence of about 2 lakh people, Azadi's Amrit Mahotsav set 2 records in the Guinness Book of World Records. FIA's Himanshu Bhatia said that Raja Chari and Antigua Prime Minister Garden Brown were honoured as special guests on the occasion. At the same time, Gastro Honor was given to Vishwasundari Har Naaz and emerging singer Devi Sri Prasad.

FIA Vice President Himanshu Bhatia told that India Day Parade and Azadi's Amrit Mahotsav were preparing for almost 1 year to make the seventy-five anniversary of independence grand and successful. The whole team FIA worked day and night to make this event a grand success. Not only this, on the occasion of Indian Independence Day, the tricolour of 220 feet long Khadi was tied on the Hudson River with the help of a plane and the tricolour was also hoisted all over New York City.

Padmashree Kailash Kher, a well-known singer of patriotic songs, conducted the 'Damru' program of the Guinness Book of World Records with the songs of Mahadev and inspired American Indians with patriotism, and reverence. While the patriotic songs of famous Bollywood singer Shankar Mahadevan instilled a sense of patriotism among Indians living in America, Bollywood actor Allu Arjun Arjun instilled patriotism and respect for the country among Indians with his desh bhakti dialogues.

4 civilians killed, 6 injured in the terror attack in J...

LG Saheb scolds me as much as my wife does not scold me...