Madarsa demolished: Another madarsa with links to al-Qaeda in Assam was bulldozed

The Assam government has bulldozers started on another madrassa after terrorist connections came to the fore. Some suspicious people associated with this madrasa have also been arrested. 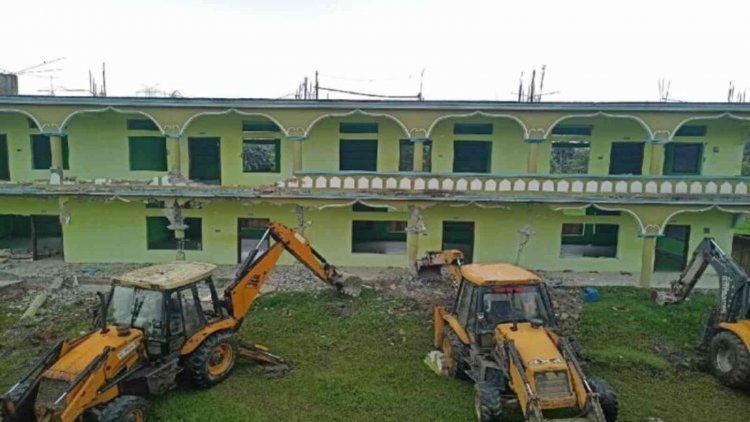 On Wednesday, the Assam government bulldozers on another madrasa linked to al-Qaeda. This is the third madrassa in the state to be demolished by the government this month after police investigations found links between these educational institutions to terror activities. This madrasa is located in Kabitari Part-IV village of Bongaigaon district. Apart from this 37 people including Imam and madrasa teachers have been arrested for their links with the terrorist organization.

The district administration had sent eight bulldozers to demolish this madrasa. Earlier on Friday, the police had arrested Mufti Hafizur Rehman, a madrasa teacher, who was allegedly a member of AQIS. On Tuesday, police along with Mufti raided the madrasa and recovered several incriminating items and literature. Mufti Hafizur Rahman was associated with this madrasa as a teacher in 2018.

Earlier, the Assam government had demolished two madrassas at Monika and Goalpara. These madrassas were accused of promoting terrorist activities under the guise of education.

Assam Chief Minister Himanta Biswa Sarma also informed us a few days ago that several modules of Al-Qaeda in the Indian subcontinent have been busted. Along with this, many activists associated with extremist organizations from some mosques and madrasas have also been arrested.