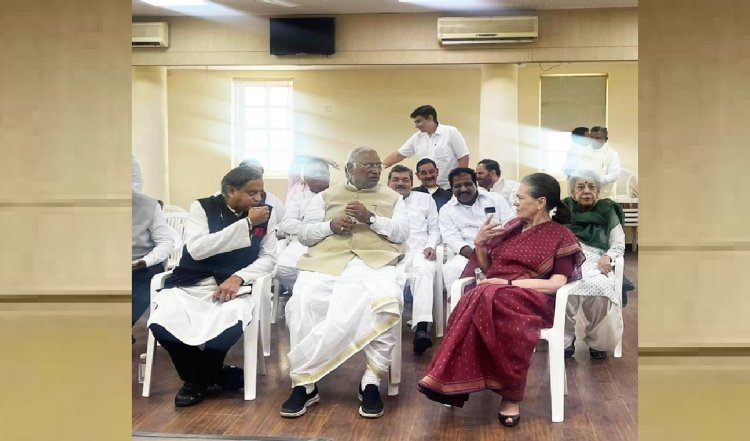 Newly-elected Congress President Mallikarjun Kharge announced the Steering Committee after taking over the reins of the party today. There are 47 Congress leaders in this committee including Sonia Gandhi, Rahul Gandhi, Manmohan Singh, AK Antony, and P. Chidambaram. It may be noted that as per the convention of the Congress, all the members of the CWC tender their resignations to him immediately after the new president takes over. Then a Steering Committee is formed in place of CWC to conduct the affairs of the party.

In such a situation, after Mallikarjun Kharge became the new president today, all the members of the Congress Working Committee first resigned him and then later Kharge formed the steering committee and included all of them in it. Apart from this, many more new members have also been included in the steering committee. Senior Congress leader KC Venugopal said, "All CWC members, AICC general secretaries and in-charge have submitted their resignations to the Congress President."

It is to be known that earlier in the Congress, there were 23 members in the CWC, the committee that took all the party-related decisions. Earlier on Wednesday, Mallikarjun Kharge officially took charge as the party president at the All India Congress Committee headquarters in Delhi in the presence of senior party leaders. Congress Central Election Authority President Madhusudan Mistry handed over the election certificate to Kharge, who defeated Shashi Tharoor.

After this Kharge said that it is a matter of pride to carry forward the legacy of Congress. Kharge then chaired a meeting of the party's Central Election Committee (CEC) to finalize candidates for the Gujarat Assembly elections. Former Congress President Sonia Gandhi was also present in the meeting. Congress President Mallikarjun Kharge will visit Gujarat on October 29. According to the information received, Kharge will address a public meeting in Navsari, South Gujarat.

AAP's victory in Delhi MCD, but lotus blossomed in the ...

'Some people of Parliament are jealous of India's growi...