From today onwards the history of Europe has changed forever. What the consequences will be, the future will tell, but Russian President Vladimir Putin has signed a declaration recognizing the so-called 'independence' of the Ukrainian regions of Donetsk, Luhansk, Zaporizhia, and Kherson. Putin said the citizens of Donbas are now citizens of Russia, forever. Putin also said that any attack on these areas would be an attack on Russia itself and that Russia would respond with full force. 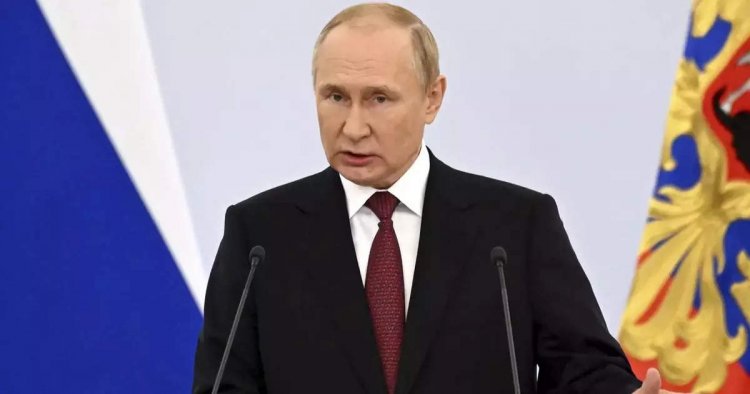 Russian President Vladimir Putin has declared the occupied territories of Ukraine as a formal part of his country. In a ceremony held in the Kremlin, he declared four regions of Ukraine, Donetsk, Luhansk, Zaporizhia, and Kherson, as Russian territory. During this, Putin said that the people of this region are now citizens of Russia and that their safety is our responsibility. Putin alleged that Western countries looted India and now his eyes are on Russia. He said that Western countries are plotting against Russia. Commenting on the former leaders of Russia, he said that they have reduced their strategic power under the guise of America, while in other countries we have maintained the same arsenal of weapons. Putin alleged that the real culprit of the genocide is the US, which has attacked countries around the world with false accusations and killed millions.

Vladimir Putin said on Friday that the West wants to colonize Russia. They have looted countries like India. (But) we did not allow ourselves to be a colony. Putin said that Russia is not trying to rebuild the Soviet Union. The USSR is no more. We cannot bring back the past and Russia no longer needs it. We are not trying to do that. Putin had previously claimed that the last Soviet leaders had destroyed our great country. Putin said that after the collapse of the Soviet Union, the West decided that now all of us must accept its decree forever. Putin said that we remember the 90s, the terrible 90s, which were full of hunger, cold and despair. But Russia persevered, revived, strengthened and again took its rightful place in the world.

Putin said the Donbas had faced eight years of genocide, shelling and blockades. The authorities in Kherson and Zaporizhzhia attempted to spread hatred toward Russia and everything that was in Russia. While the referendums were being held, Kyiv threatened women school teachers working on election commissions and repression the millions who participated in the referendums.

Putin said that I want everyone, including the officials of Kyiv and their real masters in the West, to listen to me and remember that these people are becoming our citizens forever. We call on the Kyiv regime for an immediate ceasefire and an end to all hostilities. We are ready for it.

The Russian president called on the Ukrainian authorities to respect the choices of the peoples of Donbas, Kherson and Zaporizhia and warned that Russia would defend its territories using all available means. Putin promised that cities and settlements damaged in the fighting, housing stock, schools, hospitals, theatres and museums would be restored, as well as industry and infrastructure.