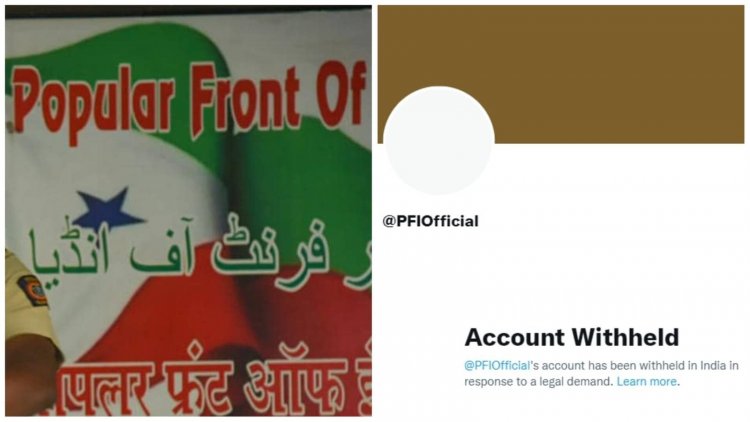 The official Twitter account of Popular Front of India, an extremist organization promoting terrorist activities, has also been closed. A day earlier, the Union Home Ministry had banned this organization for five years. After which there was talk of reining in its account present on social media. Twitter India today closed the official Twitter account of PFI following a legal demand from the central government.

Along with the closure of the Twitter account, the Kerala government has also taken action on PFI. Following the notification of the central government, the Kerala government issued an order declaring PFI and its affiliated organizations as an unlawful association. This order has been issued by the Government of Kerala today. It is known that the roots of PFI were strong in Kerala and Tamil Nadu.

Before the PFI was banned, the central agency NIA and ED had conducted marathon raids on the offices of PFI spread across the country for two days. In these two days of raids, more than 150 activists associated with PFI were detained by the central agencies. Along with this, its office located in many places was also sealed.

During interrogation, PFI workers detained by central agencies had told that they had hatched a conspiracy to riot after PM Modi's visit to Bihar's capital Patna. Even before this, PFI members in other states including UP, Kerala, and Tamil Nadu have been accused of disturbing social harmony. In such a situation, the government decided to ban it. Many people are supporting this decision of the government, while many opposition leaders are raising the demand for a ban on RSS like PFI.

Retired Lt. General Anil Chauhan gets the command of CDS, close to Ajit Doval an...

Ola-Uber and Rapido banned in Bangalore from today, Nam...