Voting for the post of Congress President after 22 years today, a contest between Mallikarjun Kharge and Shashi Tharoor

Congress President Election: Today there will be an election contest between Mallikarjun Kharge and Shashi Tharoor for the post of Congress President. The results of the elections, which are being held after 22 years, will come on October 19. With this, the party is sure to get a non-Gandhi president. 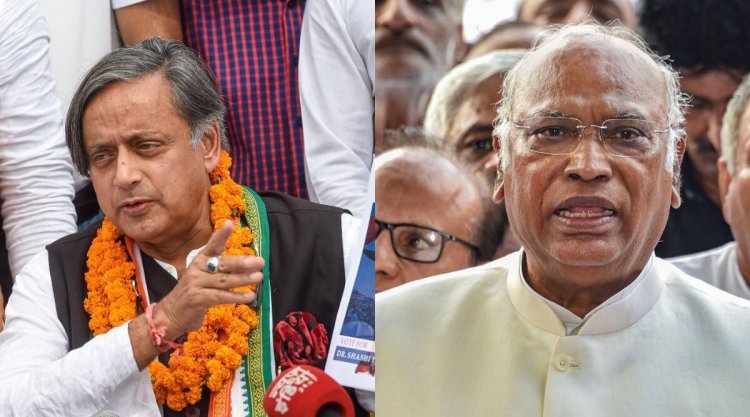 Voting is going on today for the post of Congress President. There is a contest between senior leaders Mallikarjun Kharge and Shashi Tharoor. Voting will start at 10 am and votes will be cast at 4 pm. More than 9000 representatives of Pradesh Congress Committees (PCCs) will elect the new president of the party through a secret ballot. The results will be released on October 19. For the sixth time in the 137-year history of the Congress party, the election is going to be contested. This will be the first time that after 24 years in Congress, someone from outside the Nehru-Gandhi family will become the president.

More than 9000 Congress delegates will vote in the elections to be held after 22 years. 36 polling stations have been set up across the country and there are 67 booths. Of these, 6 booths will be in Uttar Pradesh. 200 votes will be cast at one booth. With this, the party will get a non-Gandhi president. AICC General Secretary, State In-charge, and Joint Secretary can cast their vote in their home state or AICC Headquarters.

Congress party's interim president Sonia Gandhi, former PM Dr. Manmohan Singh and party general secretary Priyanka Gandhi will vote at 24 Akbar Road party headquarters at around 12 noon on Monday. At the same time, 47 delegates including Rahul Gandhi will vote in Bellary, Karnataka. Rahul is involved in the India Jodo Yatra here. Tharoor will cast his vote in Thiruvananthapuram in Kerala and Kharge in Bengaluru in Karnataka.

For the post of Congress President, Kharge seems to have a heavy hand in both the candidates. He is called the choice of Gandhi's family. Along with this, he also has the support of senior party leaders. Tharoor, on the other hand, has been garnering support by projecting himself as a candidate for change in the party. During the election campaign, Tharoor also alleged discrimination against both candidates. Many senior party leaders are supporting Kharge instead of Tharoor.

All preparations for Congress President's election completed, 68 booths of 40 po...

PM Modi on Uttarakhand tour, will offer prayers at Keda...

How will this decision of Saudi Arabia affect India's r...

Rakesh Tikait, who was going to protest at Jantar Manta...